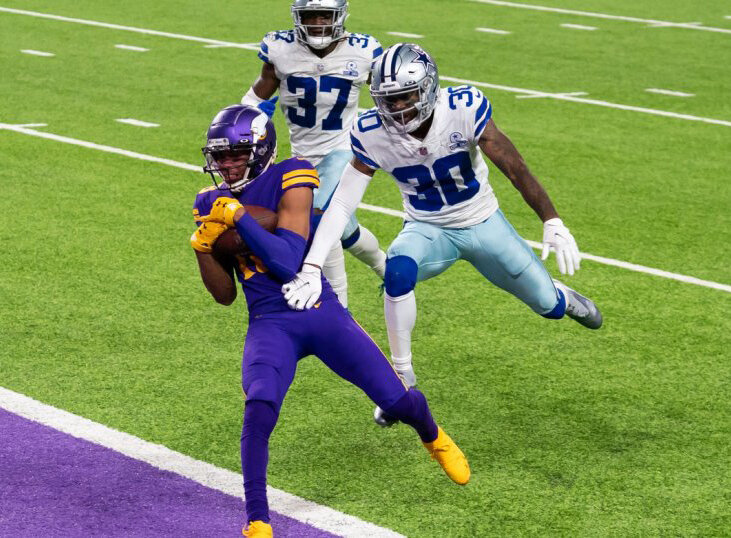 Jeudy just makes the cut over a few other highly drafted receivers including Laviska Shenault and Henry Ruggs. Both of those honorable mentions check some boxes but failed to put it all together in their rookie season to the extent that Jeudy did. Ruggs amounted to nothing in his rookie campaign but was the highest-drafted receiver of this class. Shenault greatly out-produced him with 691 total yards but still fell short of Jeudy in terms of draft capital and production. Jeudy led this trio with 856 receiving yards.

Aiyuk and Jeudy are largely interchangeable but Jeudy struggled with inefficiency and drops. He also had the luxury of not having to compete with Courtland Sutton for much of the season. Jeudy ultimately logged more receiving yards and receptions than Aiyuk but he did so with a lower yards per target. He also managed to bing in his targets at an abysmal rate of 46%. Aiyuk also added a 6-77-2 rushing line and scored a total of seven times. The rushing line sticks out as it has been a positive indicator for rookie receivers in the past including Tyreek Hill and D.J. Moore.

These next five players are largely interchangeable, representing a tier above the previous receivers but not quite at elite levels of production or previously perceived talent to warrant jumping into a new tier. Swift comes at the end of the tier but could easily be argued to deserve a higher spot. Swift routinely ceded work to Adrian Peterson which is why he comes in this low. He only earned four starts and topped 15 carries in a game once. However, his receiving prowess gives him the highest ceiling of any back in this tier. He finished 10th in receptions among rookies-not just running backs-while appearing in 13 games.

Gibson and Swift are very similar in that both players had receiving talent to spare heading into the NFL but it was reasonable to question if their respective coaches would ever grant them a three-down role. Both players also showed off their big-play ability but only one of them solidified their capabilities between the tackles. Gibson saw more than 15 carries four times and averaged 5.5 yards per carry in those games. He answered the big question that existed on both his and Swift's profiles, giving him the higher spot.

No rookie fantasy option outperformed their expectations more so than Robinson this year. He dominated on the ground and showed off his ability as a pad-catcher as well. He earned a higher share of the running back touches for his team than any other back. Had Robinson been a Day 2 pick in the draft last year, he would be a top-three selection in this draft.

The volume Dobbins saw in his rookie season is largely unimpressive. He peaked at 15 carries in a game and most recently caught more than two passes in just three games (including his playoff approaches) While playing one fewer game than Gus Edwards, Dobbins rushed 10 fewer times than the third-year grinder. However, of all the backs in this tier, Dobbins had the best pedigree by a considerable margin. He earned 300 carries in his final collegiate season and was taken by Baltimore in the second round. He was also touted as a capable pass-catcher and blocker coming out of Ohio State. Dobbins evaded tackles at a higher rate than any other back. Albeit on a small sample, his 6.0 yards per carry is one of the best marks for a back in a single season. Dobbins' efficiency and the offense he plays in are the biggest selling points and they are massive.

Higgins is the highest floor player of the rookie class that we've looked at so far and still has a ceiling that parallels all of his predecessors. Who knows if Dobbins will ever get a pass-catching role? The history for UDFA backs finding sustained success points to an extreme downside for Robinson. Etc..Etc… As a 21-year-old rookie playing with backup quarterbacks for over a third of his season, Higgins crested 900 yards and will be able to take on an even larger role with A.J. Green expected to leave in free agency. He was the 33rd pick and well-rounded prospect. His rookie season only strengthened his profile. Now, his second year should feature 16 Joe Burrow games and more targets. There are no glaring flaws with the Higgins outlook putting him at 1.06.

Edwards-Helaire is the highest-placing prospect on this list with serious flaws. Higgins may be generally bereft of holes in his profile but the best fantasy seasons since the year 2000 have all come from running backs. In fact, the top-12 seasons by PPR points since the turn of the millennium have all come from running backs. That largely comes from their ability to rack up large reception totals to compete with the best receivers and higher yardage and touchdown numbers. Those are all still within the range of outcomes for CEH. He was used as a runner and receiver and he plays for possibly the only offense that we can project to continually appear amongst the league's best for the better part of the next decade.

Akers, a home run hitter who succeeded at Florida State despite a comically poor offensive line, showed us everything he needed to in the final few games of his rookie campaign. From Week 13 through the end of the Rams' playoff run, Akers averaged 23.8 touches for 118 yards and .5 scores per game. He completed shut out his backups and should be playing for a better offense in 2021 with Mattew Stafford under center. With any questions about his game answered and an improving situation, Akers is simply the running back version of Tee Higgins.

Lamb ran laps around the Big 12 for the majority of his three seasons at Oklahoma and tested well athletically. Then, in his first NFL season, he held his own against Amari Cooper and Michael Gallup. He racked up over 900 yards with backup quarterbacks throwing him the ball, just like Higgins, only his offense should go through the moon with Dak Prescott healthy for 16 games. We can't say the same about Burrow and the Bengals just yet.

If teams were still willing to spend a top-five pick on a running back, Taylor could have been the next Ezekiel Elliott or Saquon Barkley. He tested similarly to those players at the combine and topped 2,000 yards from scrimmage in all three of his college seasons at Wisconsin. After a slow start to his rookie season, Taylor capped off the year with seven straight performances over 70 yards, two games over 150, and one over 250. Nyheim Hines' threat as a receiver keeps Taylor out of the 1.01 spot but he is head and shoulder ahead of all other 2020 rookie runners.

After setting the record for receiving yards by a rookie, it's hard to argue for anyone other than Jefferson as the top rookie from 2020. Since 2000, all but two of the 11 players to top 1,000 receiving yards in their rookie season have repeated the feat. The four receivers to top 1,100 receiving yards as rookies have accounted for 13 1,000-yard seasons and counting. Wideouts who excel as rookies tend to continue doing so far years on end. We can reasonably expect that from Jefferson going forward.