For millions of Americans, the pandemic and subsequent economic crisis has turned life upside down, and the impact will alter our nation and culture well into the future. In order to pass away the long days in quarantine, I walk the dogs twice a day, read graphic novels from my youth and binge-watch shows on Netflix. Of course, I have also spent countless hours researching for the upcoming fantasy football campaign, and even drafted a few Best Ball teams.

Like many sports fans, I miss spending my weekends in front the television viewing live events. ESPN’s Last Dance provides a welcome diversion from the daily routine. I have watched every episode, and so many great memories have been resurrected as a former basketball junkie.

In the Nineties, I loved the NBA and regularly attended Nets games in New Jersey, and a couple of times, even purchased tickets to the Knicks in Madison Square Garden. I saw many of the dominate players—Shaquille O’Neal, Patrick Ewing, Karl Malone, John Stockton, David Robinson, Penny Hardaway, Jason Kidd, Hakeem Olajuwon and Charles Barkley—of the decade in person.

On Sunday, Episode 5 of the Last Dance dug into the 1992 Dream Team, and I will never forget watching the Olympic games in Barcelona, Spain. After the show, I ventured into the basement to look through my old collectables to see if I had my vintage 1992 Starting Lineup Olympic Basketball Team USA figures. Bazingo...I still have Sets One and Two after all these years. 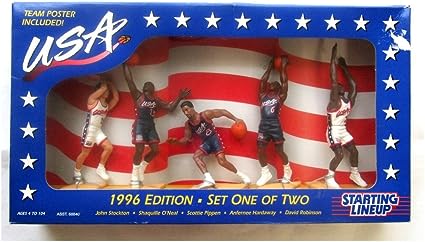 The reminiscences inspired me to name a Fantasy Football Best Ball Dream Team for the upcoming campaign. For three years, I have enjoyed Best Ball and even made a little cash. When giving fantasy advice, I am conservative, and patiently waited until I absorbed the Best Ball format before offering recommendations. Now, I feel confident enough to publish my first article digging into current ADP.

In the first six rounds, my goal is to acquire three running backs and three wide receivers. In a best-case scenario, I kick off my draft with three consecutive runners followed by three receivers.

In a recent Best Ball Draft, I followed my model and acquired the following nucleus for my team:

After thirty-two years managing fantasy football teams, I believe that the draft really begins in the seventh round when depth is acquired to lead your team to victory. Therefore, I wanted to identify my Dream Teamers for Rounds 7 through 15 to construct a winning squad in 2020.

In order to assess value, I studied recent ADP* data on BB10s, scrutinized Consensus Fantasy Football Draft Rankings on FantasyPros.com and included my personal Fantasy Football rankings. I have identified ten players on my 2020 Dream Team and named a four-player taxi squad to target in the final five rounds.

There is risk selecting Terry McLaurin: A new defensive-minded coach and a young and inexperienced quarterback might limit the sophomore’s upside in 2020. Yet, he is the alpha dog in Washington’s passing game and likely to lead the team in targets, receptions and touchdowns. I will embrace the gamble considering the difference between expert rankings and ADP.

Which wide receiver are you targeting at their current ADP in Best Ball Leagues?

“Diontae Johnson has transcended sleeper status. He is one of my guys for next season and should be one of your guys too.”

“Man, fade John Brown at your own peril. He has always had talent but has been marred by illness (ILLNESS, not injuries). Dude just put up 72 catches for 1,060 yards and six touchdowns as the No. 1 in Buffalo while drawing premium coverage. Now, he has Stefon Diggs to attract the best coverage by opposing defenses. The man is a steal at his ADP.”

Once again, there is a huge schism between the experts and Best Ball owners. I will always exploit those differences. Jarvis Landry is the epitome of consistency: In six seasons, he has recorded more than 81 catches in each, logged two campaigns with over 100 receptions and totaled over 1,100 yards receiving three times. I am buying at the discounted price. 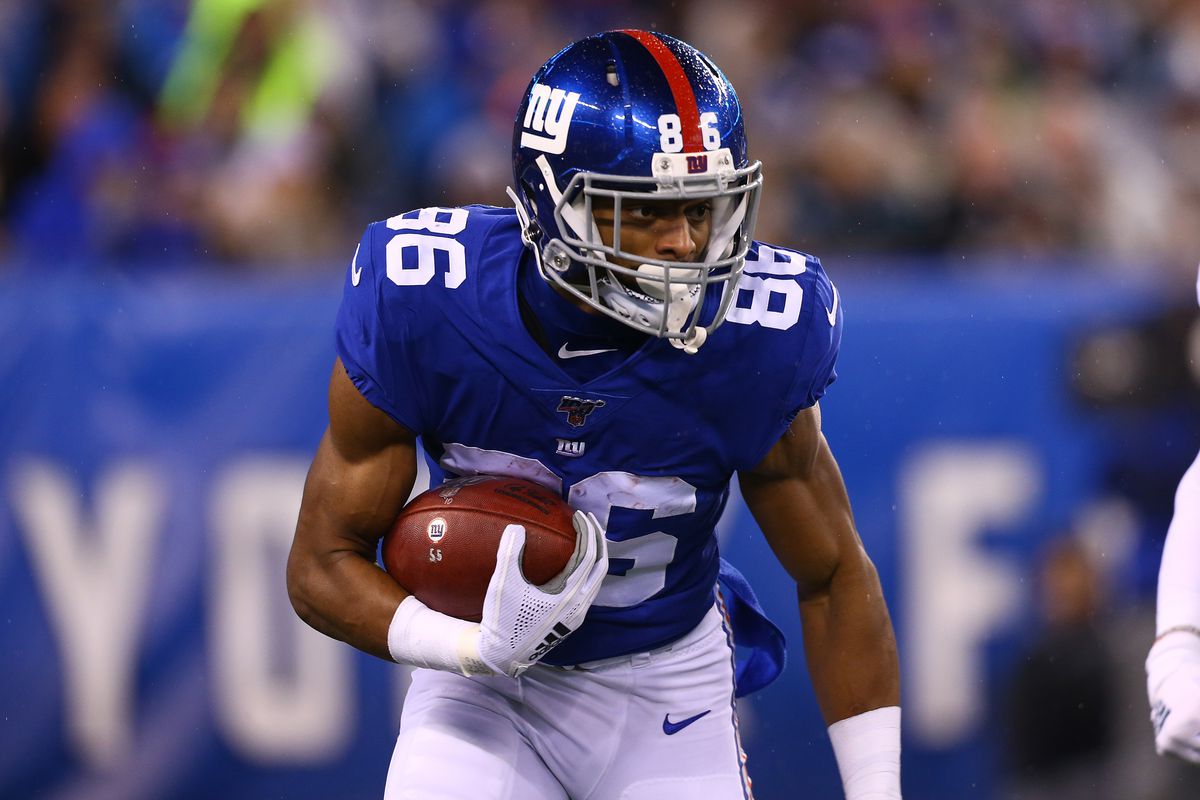 So many fantasy experts, myself included, are excited for QB Daniel Jones to take a leap forward in production this season. Well, I want a cheap piece of the Giants’ offense, and Darius Slayton’s price tag propels me to buy. Last year, the rookie exceeded all reasonable expectations with 48 receptions for 740 yards and eight touchdowns. With an aging Golden Tate and under-achieving Sterling Shepard on the roster, I foresee Slayton ascending to the lead role in New York.

I am a believer and have already drafted Carson Wentz on four of my five teams to kick off my fantasy football season. Last year, the Eagles’ passing game could not attack defenses vertically and opponents crowded the middle of the field. General manager Howie Roseman addressed Philadelphia’s weakness by drafting three speedsters: Jalen Reagor, John Hightower and Quez Watkins. In 2019, Wentz finished among the Top Ten fantasy signal callers, and I project an even better crusade with the additional playmakers in the City of Brotherly Love.

For years, I have never paid a premiem price for a tight end. In 1993, I first observed the utility of the strategy when my friend drafted Patriots’ TE Ben Coates and retained his serves the next year in a three-player keeper league. In 2003, my first successful foray into dumpster diving occurred when I selected Antonio Gates in the final round of the draft. Last year, I won the lottery by drafting Mark Andrews in eight of my fifteen season-long leagues. I am not going to change my strategy now despite the danger of striking out. Both Dallas Goedert and Mike Gesicki are late-round gems in 2020 Best Ball drafts.

Identify the running back you are targeting at their current ADP in Best Ball Leagues?

Once again, the data points illuminate an undervalued asset in Best Ball Leagues: Fantasy Experts rank Anthony Miller much higher than BB10s owners. When the difference is so vast, I have to take the plunge and procure the player. In 2019, the third-year receiver showed improvement and produced a five-game stretch that illuminated his ceiling. In Weeks 11 through 15, Miller snatched 33 passes for 431 yards and two touchdowns. If he comes close to replicating those numbers over a longer period, Miller’s ceiling is a Top 24 receiver in fantasy football.

I will not own any shares of the newly acquired RB David Johnson in Houston. Let me repeat myself…Zero. I am not interested in purchasing a 28-year old runner who is on the final lap of his career. Instead, I’ll take the discount on the Texans’ pass-catching ball carrier. A third-round pick in 2015, Duke Johnson remains under used as a runner. In the passing game, he has secured at least 62 passes every season and recorded 279 catches in five campaigns. If the former Cardinal fails to resurrect his career, Johnson will receive the majority of snaps and touches in the Houston backfield. Full disclosure: I am a Denver Broncos fanatic. Nevertheless, I do not allow my fandom to cloud my fantasy judgement. I must be objective to provide the most salient analysis possible. General manager John Elway and the Broncos must first defeat AFC West rival, and Super Bowl Champion, Kansas City Chiefs in order to get back to the top. How does the Hall of Famer construct a winning team around his young quarterback? Draft firepower at the skill positions. Denver drafted receivers Jerry Jeudy and K.J. Hamler and added tight Albert Okwuegbunam to complement Courtland Sutton and Noah Fant. In the fourteenth round of Best Ball drafts, Lock provides enormous upside potential.

Identify the quarterback you want to acquire at their current ADP in Best Ball Leagues?

“Teddy Bridgewater is basically free. At his ADP (175), a starting quarterback, with all those weapons, is an easy call. Risky in that if you miss on him, you’re scrambling.”

In a Dynasty league last year, I snatched QB Jarret Stidham and WR Allen Lazard off the waiver wire. I did not expect both players to be viable fantasy assets as Memorial Day approaches in 2020. During the offseason, I anticipated that Stidham and Lazard would lose fantasy value as their respective organizations upgraded the talent. Surprisingly, the Packers completely ignored the receiver position in free agency and the Draft, leaving Lazard as the likely starter opposite Devante Adams. An undrafted free agent, he originally signed with Jacksonville coming out of Iowa State and spent a year on the practice squad. On September 1, 2019, the Packers signed Lazard after the Jaguars released him the day before. He did not get onto the field until Week 6 against Detroit and finished the season with 35 receptions for 477 yards and three touchdowns. I’ll invest at his current price.