The Free rate my fantasy football team tool evaluates your roster by skill position and gives you a letter grade from A to F for each position. You also receive an evaluation of NFL bye week issues at each skill position.
League type :
Number of Managers :

What is the process for rating fantasy football teams?

First you must break down the team into skill position: quarterbacks, running backs, wide receivers, tight ends, kickers, and defenses. Then you have to compare each player in each skill position to the current rankings at footballdiehards.com. If you rank your team in preseason not far from your draft, we will use the current draft rankings. These draft rankings are updated daily in the preseason to reflect any changes in players that have been hurt or are now playing better during the course of NFL training camp and preseason play.

If you're analyzing your team in-season (leagues) the rankings are based on weekly rankings from NFL week one through week 18.

What factors are considered when rating fantasy football teams?

One of the more important factors is to use the league scoring system as closely as possible. Some scoring systems are very complicated and can't be easily calculated into the live rankings. Most scoring systems in the modern world include touchdowns passing yardage rushing yardage field goals defenses scoring receiving and receiving yardage and special teams scoring. Distance scoring can be confusing to use to rate a team because we are using a ranking that is essentially, year-to-date.

Helpful Tips that increase the benefit of rating your fantasy team

What are the best ways to improving you team

You can improve your fantasy football team in two major ways – free agent/waiver wire pickups and trading with managers in your league. Trading is a very detailed process that takes a lot of time and negotiation. Mike Dempsey of siriusXM fantasy radio understands the art of trading at very high level. To learn more about trading check out our video on trading with Mike Dempsey.

Mock Draft - Then use Rate My Fantasy Football Team Tool

Mock drafts are very popular to prepare you for your fantasy drafts. You can mock draft with many tools such as the one we have at Footballdiehards.com: fantasy football mock draft simulator. Another excellent way to mock draft is to get into free leagues are very low dollar mocks and even Best Ball leagues to practice drafting. One helpful trick is after you complete a draft of these types of mocks and best balls and free leagues, put your team in the rate my fantasy football team tool and see how it rates / analyzes your draft performance. What a nice and quick way to judge your drafting strategies. You can iterate many times to see if you're leaning in one direction with a draft strategy that you didn't even realize.

Are you getting Good Grades Across the Skill Positions

Perhaps you think you draft really well. Then perhaps you over emphasize certain players are certain skill positions that are your favorite. Sometimes your emotions overcome your judgment when you are drafting. This is why we strongly suggest using the rate my fantasy football team tool after you do mock drafts or after any league draft whether it's a cheap league are very importantly. Take a deep breath and see what it tells you, perhaps you don't realize that you are skipping a certain skill position too long in your draft. A typical issue that we've had over the years is if you wait too long on tight ends you may end up with a very poor performing skill position. And then you can go back and mock draft and take one of the top two or three tight ends and see how hard it is to fill the rest of your team. It's not only mock drafting but it's then really getting a feel for what was my strategy and maybe it needs improvement.

There can be significant differences in your approach to your draft if your league is using 10 teams with a short roster depth of say 14 or 15. On top of that if your league is a standard league with zero PPR, this may make quarterbacks more important. So, let's say you like to take quarterbacks late but in a league that I just described perhaps especially if there's a scoring level of the first two or three quarterbacks may have enough maneuvering to take a top quarterback and still end up with an excellent balanced roster. So, as you mock different styles of leagues, running them through the rate my fantasy team tool can really help you adjust your draft strategy across your various types of leagues.

It's easy to fall into particular habits when you draft. Applying the same draft strategy to various types of leagues may not be a smart idea. Even from year to year the players change. Levels can appear each year or move around or downright disappear. Sometimes you have a very defined scoring level at position one, two or three position at Tight End. Sometimes that same thing occurs a quarterback perhaps slightly deeper. And in your mind, you just think it's going to be that way every year. That could be a big mistake. Things change every year, and you need to re-evaluate these levels which can completely change where you draft certain skill positions round to round in the draft.

Here is an example of a limited starting lineup league hosted on the Yahoo's fantasy football platform. In this league there are only two starting running backs and two starting wide receivers and a limit of 16 total players on the roster for each team. Also, this league is only a 10-team league. Following are the ranking results from the tool. And the bye week grades in another table. The tool also points out players that football diehards staff consider sleepers.

As you analyze these results it's obvious that the running backs drafted were poor and got a grade of D. And an A+ for tight end based on drafting Travis Kelce from the Kansas City Chiefs. The draft strategy for this particular team was to draft quarterbacks late as you can see the drafted Derek Carr from the Raiders and Kyler Murray from the Cardinals. This manager needs to look at the free agents via waiver wire for basically running backs and also review the other teams running back situation to see if the team has an abundance of running backs to trade to him. Again, if you use the Pro rate my team tool that is under the paid wall it will show you all this information so you can quickly get to that point. According to a survey from Yahoo! Sports, your average fantasy manager spends more than four hours a week on fantasy football. Hence, the Pro rate my team tool could minimize this time and quickly gives you the strengths and weaknesses of your opponent's so you can skip that step and get right to creating trade proposals to the managers that strengths and weaknesses fit the best. 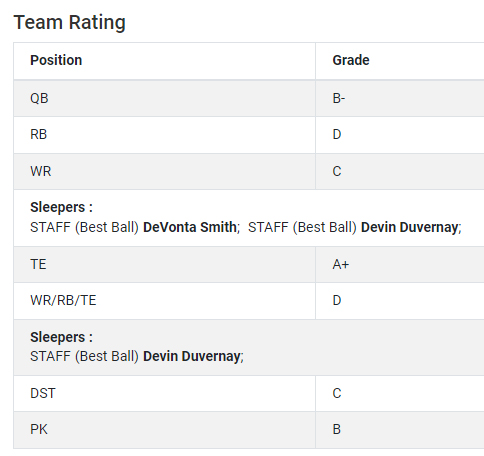 The next tabulation reviews bye weeks for each skill position. This lets you know if you have any critical weeks that you need to plan ahead for. Another thing to keep in mind is you can run this rate my fantasy team anytime of the preseason and in the regular season. As you're modifying your team through free agency / waiver wire and trade you can go back to the rate my team tool and reanalyze your team to see if you helped your weaknesses or you have new weaknesses you need to work on. 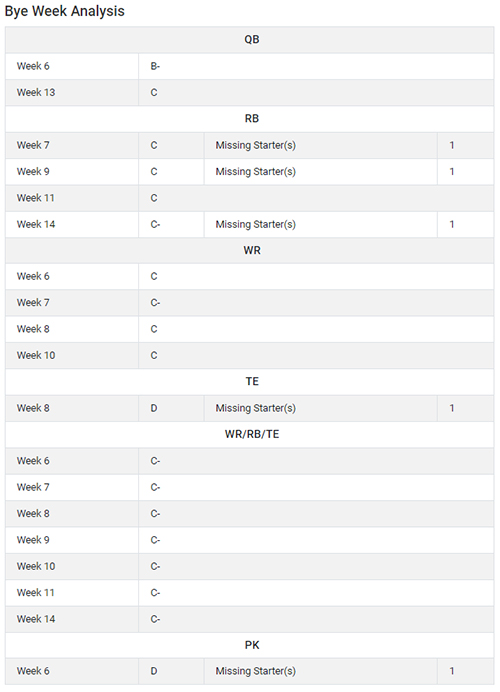 Why should I rate my fantasy football teams?

To learn if your draft strategy is failing to give you balanced skill position team and locate your strengths and weakness.

Can I learn if I have any NFL Bye week issues?

Yes! You will receive a bye week analysis which can help you in free agency / waiver wire or trades to clear up any bye week issues.

Should I make any trades?

If your analysis shows a weakness at a skill position, you can start looking for trade possibilities. Football Diehards' Pro Rate my team analysis tool will show you your weaknesses and also your opponent's weaknesses and strengths so you can postulate possible trades.

They don't. Not directly anyway. What rankings do is help you understand the quality of your team with respect to what the algorithm thinks you should have, given the rules, and starting lineup limitations. The next step is to use our Pro Rankings tool. The Pro Tools ranker evaluates the whole league and ranks your team with respect to the other teams in the league. It also will give you the strengths and weaknesses of the other teams so you can suggest trades to help your team and also help your opponent you are attempting to trade with. Kind of a win-win.

How do I know if my fantasy football team is good?

If you have As and Bs grades across all your skill positions, then you have a good team. Typically, you will have some weaknesses. The important thing is you continue to work on your team - by picking up players in preseason and always evaluating each week of the regular season to see if there are free agents that can help your team.

How do I make my fantasy football team better?

Fantasy football is a hobby. It's fun and gets you away from the stresses of life like a hobby should. Not to be forgotten, people who do the best at fantasy sports work hard at it. They're constantly trying to make their team better by trading, picking up free agents, streaming defenses, and placekickers. Those are ways to make your team better. Determine the weaknesses your team may have - gotten worse and places gotten better. And if you use the Pro Rank tool and evaluate your league and you find out the strengths and weaknesses of your opponents which allows you to make fair trade proposals. I personally get busy sometimes and I don't look at free agency every week. If you want to improve your team, you need to work hard and not skip a week. Always be evaluating possible trades and free agent pickups. You should analyze free agency every week, but you don't have to make any moves. If you don't have your pole in the water, you can't catch any fish.