During quarantine, I have had plenty of time to reflect on life, football and family while patiently passing away the long hours. One of the best lessons that a veteran educator imparted on me was the importance of reflection, and my Dad taught me the value of patience. Both are invaluable assets as a teacher, father and fantasy football analyst.

In 1989, I organized my first fantasy football league and commissioned it by hand with paper, pen, calculator and newspaper box scores. For seven seasons, I managed waiver wire phone calls, recorded lineups, totaled matchups and mailed the results to league mates. Finally, one of the owners purchased software to manage the league that cut my duties in half.

The storied history of the NFL enthralls me. It is stimulating to look into the past and relive amazing moments: I own DVDs of Super Bowls XXV, XXXII and 50 and often rewatch the games. When I am bored, I go to Game Pass on NFL.com and put on an old game. It is my second favorite diversion after alternative-reality football.

For years, I wanted to compose an article on the forgotten quarterbacks in fantasy football, but my busy schedule prevented me from completing my aspiration. Over the past week, I had no more excuses and plenty of time. I leafed through my dusty binders on the book shelves, relived many memories throughout my fantasy football journey and identified ten one-year wonders who are largely overlooked in history.

I’ll never forget the summer of 1989. I just graduated college, and rented an apartment on the second floor in a three-family house with two other friends. One of my roommates and I commuted 45 minutes to work at Norwalk Parks & Recreation as counselors for children under 14. 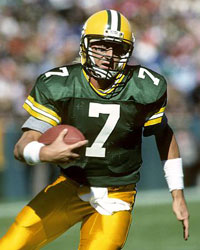 My life changed forever when we organized a fantasy football league while driving: I have been addicted to the hobby ever since. We knew so little about the game that six quarterbacks were selected in the first round. Of course, no one drafted Don Majkowski, and my other roommate picked him off the waiver wire after Week 1. Over thirty years later, I still fondly remember the Majik Man’s enchanted season.

In 1988, the Packers posted a 4-12 record and only the most fanatical fans expected a better team in coach Lindy Infante’s second campaign. At 25-years old, Majkowski orchestrated a remarkable turnaround, leading the Pack to a 10-6 mark. He passed for 4,318 yards (NFL best), tossed 27 touchdowns, rushed for 385 yards, scrambled for five touchdowns and named second-team All-Pro. Unfortunately, Green Bay just missed the playoffs, and the Majik Man never duplicated the fairy-tale campaign.

Despite playing only six seasons in Green Bay, the dual-threat gunslinger is a member of the Packers Hall of Fame. “It’s an honor to be in such a special group…and be around all the great players in team history. I’m blessed to be a part of (the Packers),” Majkowski stated in an interview with Rich Palzewic on gopresstimes.com in 2019. He is also remembered and appreciated by long-time fantasy footballers like myself.

Identify the most exciting AFC Championship Game over the past 55 years:

“New England vs. Kansas City. I was lucky to witness that one firsthand.”

“I have to go with 1986 AFC Championship Game (Broncos-Browns), but I am bias. If I never see “The Drive” again it will be too soon. But I can’t recall another game where I was that involved sitting at home. What a Championship game.”

In NFL history, there are not many Lions' teams that fans look back and reflect with fond memories. In the 1950s, there is the Bobby Layne era when Detroit won three NFL Championships, and the Barry Sanders decade (1989-1998) despite winning only one playoff game.

In 1995, the Lions fielded one of the most exciting offenses of the decade. The unit scored 436 points (27.3 ppg.) and ranked second in the league in total yards. Sanders anchored the offense, and Herman Moore (1,686 receiving yards & 14 TDs) and Brett Perriman (1,488 receiving yards & 9 TDs) dominated opponents down the field. Quarterback Scott Mitchell benefited from all of the firepower in coordinator Tom Moore’s high-flying attack.

In the 1990 NFL Draft, the Miami Dolphins chose Mitchell in the fourth round, and he learned under the tutelage of coach Don Shula and QB Dan Marino. In 1993, Marino tore his right Achilles tendon, and Mitchell replaced the Dolphins’ legend under center. The left-hander parlayed his opportunity into a lofty free-agent contract with the Detroit Lions.

During his second season in the Motor City, Mitchell posted the magnum opus of his career. The former Utah pitcher led the Lions to a 10-6 record and playoff berth. With Moore, Perriman and Sanders, Mitchell flourished and concluded the campaign as the second-best signal caller in fantasy football. He posted a 92.3 passer rating, paced the league in yards (4,338) and finished third in touchdowns (32). While he never replicated his noteworthy ’95 campaign, many fantasy footballers rode Mitchell’s left arm to championships.

In 2016, I read about the personal challenges Eric Kramer underwent over the past five years. It saddened me. Surprisingly, the news also brought back wonderful recollections of his unforgettable season.

My first recall of Kramer is from 1991 when he led the Lions to their first playoff victory since the 1950s, defeating the Dallas Cowboys 38-6 in the Divisional Round. After two disappointing seasons in Detroit, he signed a free-agent contract with the Chicago Bears.

While Scott Mitchell was drafted in fantasy leagues, Kramer was a waiver wire gemstone. I secured his services after an impressive opening game performance against the Vikings: He tossed three touchdowns as the Bears scored 31 points on the road. He continued to tear opponents apart all season and assisted my fantasy team to an undefeated season at 14-0. Regrettably, I lost a heartbreaker in the semi-finals of the playoffs…a painful memory.

Twenty-five year later, Kramer owns the two most prestigious single-season passing records in Bears’ history: He established a franchise record for touchdown passes with 29 and posted the top single-season passing yards mark with 3,838. From a fantasy perspective, he finished as the sixth-ranked signal caller, scoring over 250 points.

Looking back, it is surprising that two quarterbacks charted their finest fantasy season in the same year. Neither Mitchell nor Kramer came close to replicating their success and production again during their careers.

In the Eighties, the Miami Hurricanes were must watch football on Saturdays, and in 1986, Vinny Testaverde’s Heisman campaign propelled him to the first-overall pick in the NFL Draft. Sadly, the Buccaneers were a terrible team, and the former Hurricane could not turn the franchise around. He tossed a dreadful 63 interceptions during his first three years in Tampa Bay and played another three before landing in Cleveland.

Three years later, Browns owner Art Modell moved the franchise to Baltimore in 1996, and hired Ted Marchibroda, who had led the Colts to the AFC Championship Game the year before, as the new coach. In 1976, Marchibroda trained, and tutored, QB Bert Jones to the Associated Press MVP Award, and in 1995, QB Jim Harbaugh produced his most productive season with 17 touchdowns under the coach’s wings. 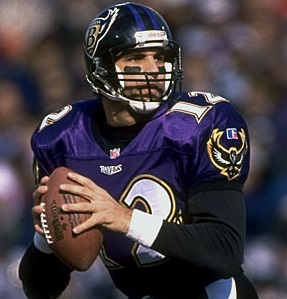 In 1996, Testaverde, who had never ascended to elite fantasy status, would benefit from Marchibroda’s leadership and guidance. Baltimore employed one of the underrated receiver duos in the league with Michael Jackson and Derrick Alexander, and Testaverde possessed the experience and arm strength to take advantage of the playmakers. Finally, skills, experience, coach, teammates and system elevated the Ravens’ signal caller among the best quarterbacks in the NFL.

In my three-player keeper league, I had retained the services of Erik Kramer and drafted Gus Frerotte as my backup in 1996. After two games, Testaverde passed for 373 yards and tossed four aerial strikes. Frerotte had not met my expectations, and I grabbed the Ravens’ veteran off the waiver wire.

For the rest of the year, Testaverde started in my lineup. When the curtain closed, he established career highs in passing yards (4,177) and touchdowns (33). He also rushed for 188 yards and two touchdowns. Testaverde finished the campaign as the second most productive fantasy quarterback, and I captured my third fantasy championship in eight years.

Identify the most exciting NFC Championship Game over the past 55 years:

“Your audience is too young. The only legitimate answer here is the Ice Bowl, a game so historic it got its own moniker. I can't think of another NFL game to earn that distinction. It was a rematch of the previous season's NFL Championship game and pitted two Hall of Fame coaches against each other: Tom Landry and Vince Lombardi had been the Defensive Coordinators and Offensive Coordinators on the New York Giants juggernauts of the late Fifties.”

“The 1998 NFC Championship Game between the Vikings and Falcons. The game was crazy good.”

By the fall of 1994, my Grandma had entered Stage Five (Moderately Severe Impairment) of Alzheimer’s Disease, and Mom and Dad moved into her house to take care of her. One Saturday, my parents asked me to stay with Grandmother so that they could leave the house…of course, I said yes.

Guess what game we watched that eventful afternoon? Colorado at Michigan when Kordell Steward executed “Jets, Rocket, Victory” for a game-winning, 64-yard touchdown pass to Michael Westbrook. As a Wolverines fan, I was crushed, and to this day, I’ll never forget Steward’s Hail Mary in the Miracle at Michigan. 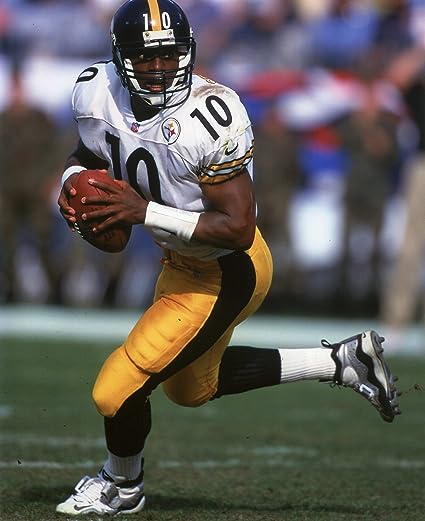 In 1995, Pittsburgh selected the former Colorado star in the second round of the NFL Draft. As a rookie, he recorded touchdowns passing, rushing and receiving. Flash forward to the fall of 1997 when “Slash” took over the reins of the Steelers’ offense. He dazzled the entire league and the fantasy football world with his incredible dual-threat skills.

Stewart finished the crusade as the second-highest scoring fantasy quarterback. He passed for 3,020 yards and 21 touchdowns, and more importantly, rushed for 476 yards and 11 touchdowns. Slash became the first quarterback in NFL history to record over 20 passing and 10 rushing touchdowns. My only regret was that I did not own Stewart in either of my two fantasy leagues from his memorable season. Stewart and Randall Cunningham paved the way for the modern dual-threat signal callers in the NFL. Regrettably, the former Steeler is forgotten by the vast majority of football diehards.