Ranking the Runners part I

As a teacher, I spend countless hours grading homework, essays and projects and evaluating students from a holistic approach each year. It was not difficult to transition into a Draftnik for fantasy football diehards like myself seven years ago. I had the skills, education and passion: I just needed to apply those to a new challenge.

Over a decade ago, I enjoyed reading Malcolm Gladwell’s Outliers and totally bought into the rule of 10,000 hours to master a craft or skill. It took me five years to become a rock star educator and hoped that I could replicate the journey as a NFL draft diehard. After seven years, I feel more confident than ever as a Draftnik while watching film and analyzing prospects.

While the running back cadre is not as strong as Dynasty Footballers hoped after Travis Etienne, Chuba Hubbard and Najee Harris returned to campus, the elite in the Class of 2020 remains bountiful. Unfortunately, the talent drops off after the top six running backs are off the board.

This year, I have added two statistics—Yards from Scrimmage and Team Scrimmage Yards Distribution percentage—to provide more in-depth breakdown of each prospect. Both measurements are from each prospect's final season on campus. Runners who contribute in the passing game provide coaches a three-down back and more easily disguise the play call compared to a one-dimensional runner like Derrick Henry and Duke Johnson. Three-down backs also deliver more fantasy value with greater potential market-share of the touches in the backfield.

Many franchises need a ball carrier who can impact the outcome of games on all three downs, and this group of prospects provides some prime options. In 2020, I project that at least three of the rookies will earn starting roles and likely exceed 1,400 yards from scrimmage if given over 225 touches. After film assessment and data analysis, J.K. Dobbins, Ohio State, Jonathan Taylor, Wisconsin and D’Andre Swift, Georgia earned first-round grades, and Clyde Edwards-Helaire, LSU and Cam Akers, FSU netted second-round scores in my grading system.

Listed below are profiles on the top ball carriers as well as their benchmark stats to assist in pinpointing runners at the next level.

Yards per Carry: Over 5.25 yards per carry

Official Combine and Pro-Day measurements will be updated as become available.

Phenomenal college resume: One of the most decorated runners in history. In 2019 and 2018, rushed for over 2,000 yards each season, Doak Walker Award Winner, Ameche-Dayne Big Ten Running Back of the Year and unanimous First Team All-America. In 2017, Freshmen All-America and Second Team All-America after setting a freshman record with 1,977 yards. Concluded career as only the seventh player in history with over 6,000 rushing yards, and the first to accomplish the mark in three seasons. Second player all-time to rush for over 2,000 yards twice. Second most productive runner in Big Ten history, trailing only Ron Dayne (1996-99). Rushed for over 200 yards in a game 12 times. Finished in the top ten of Heisman voting all three seasons at Madison. In 2019, led the nation in touchdowns with 26 (21 rushing and 5 receiving). At 5-foot-10 and 226 pounds, striking size-and-speed combo. Compact and tough ball carrier with sturdy lower body. Smooth runner who runs behind pads. Runs well in tight quarters, allowing blocks to form and dashing through contact. Does not fall easily and breaks arm tackles. Finds cut back lanes and smallest of creases in congestion. Welcomes contact and batters opponents. In short yardage, drops pads and packs a punch. Excellent on counters and power plays: Power scheme would maximize run skills. Scampers with purpose: Understands blocking schemes, identifies windows, reads holes and finds lanes. Assaults the A- and B-gaps with anger and determination. Also, can spurt out wide when necessary. Home-run threat. Workhorse ball carrier with 968 career carries. Improved as a pass catcher in 2019. Reliable and soft mitts. Needs to work on route running skills. Poor ball security with 18 fumbles in 41 games. Not a speed back and might be limited as a two-down player unless receiving skills improve. An immediate contributor as a professional who has Pro Bowl upside in the right offensive scheme.

The tenacious junior declares for Draft. Bulldogs’ pipeline—Nick Chubb, Todd Gurley, Knowshon Moreno, Garrison Hearst and Herschel Walker—produces another elite running back prospect. In 2019, Coaches’ All-SEC First Team, co-winner of the Vince Dooley Offensive MVP and Team Captain. Finished Georgia career as the seventh all-time leading rusher in school history. In 2017, Coaches’ Freshmen All-SEC Team. In high school, USA Today All-USA First Team, played in U.S. Army All-American Bowl and five-star recruit by Prep Star Magazine in 2016. At 5-foot-8 and 212 pounds, smooth athlete with outstanding leg drive. Elite game breaker who is a threat to score any moment on the field. Patient, physical and tough runner who succeeds in heavy traffic and owns explosive speed on the perimeter. Fantastic feet and vision with low center of gravity. Plants foot and bursts up field: Arrives at second-level of defense rapidly. Great stutter step and changes directions easily. Tremendous long speed. Wins one-on-one matchups. Employs a sneaky and slippery spin move to evade tacklers. Excellent spatial awareness: Identifies angles and creases to find open space. Natural hands catcher who runs crisp routes. Possibly, best pass catcher in the Class of 2020. Very solid in pass protection. Likely best employed in a zone blocking scheme but can be used in a gap one. Coaches and teammates wax poetically about character and work ethic. Not a bell cow runner on campus with only 513 touches over three seasons: Lots of mileage remaining on tires. A big-play ball carrier who is likely selected in the first round of the Draft. 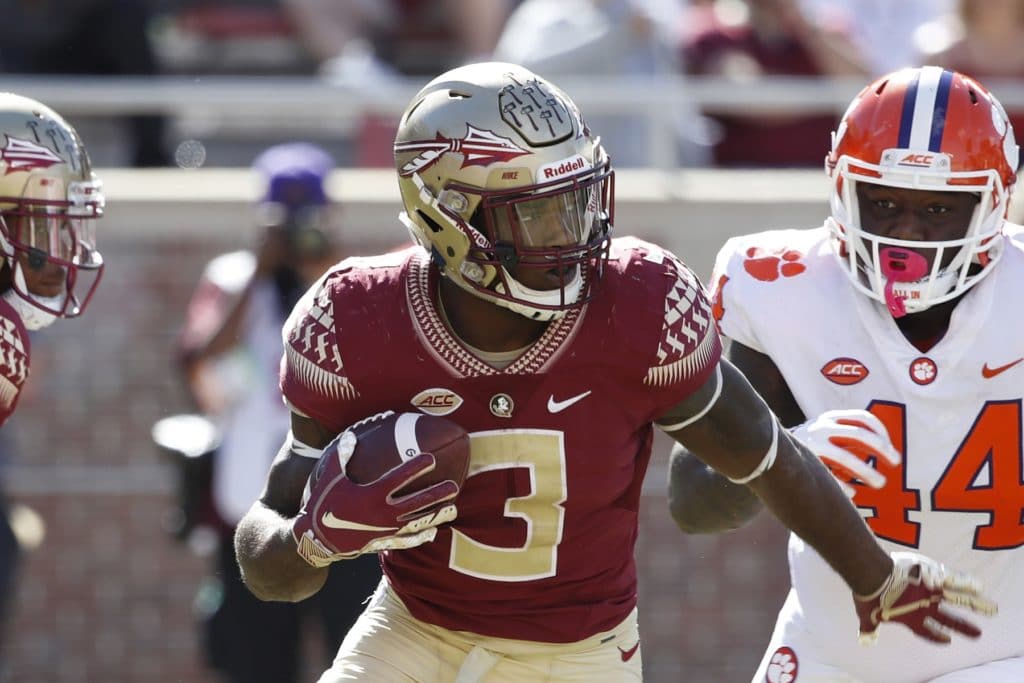 Sensational Seminole jump-starts professional career a year early. In 2017, one of the most highly-recruited players in the nation and a five-star prospect who was the No. 1 ranked RB in the country. Failed to live up to lofty expectations immediately at FSU; nonetheless, finished career strong. In 2019, Second Team All-ACC and in 2017, Third Team All-ACC. One of only seven players in FBS to score three or more touchdowns in three games this season. Concluded FSU career as the sixth all-time leading rusher and fifth with 586 carries. Only third runner in school history with two 1,000-yard seasons joining Warrick Dunn and Dalvin Cook. At 5-foot-10 and 217 pounds, violent runner with very good leg drive, power and explosiveness. Attacks hole rapidly, finds a crease and blasts through it. Top-notch contact balance and rarely tackled on first contact. Rambles with square pads and leverage. Challenges opponents. Tacklers bounce off hip pads. Impressive wiggle for a big athlete. Makes defenders whiff in tight spaces. Good speed in-and-out of cuts. Stops suddenly, darts out of traffic and accelerates promptly. Reaches overdrive in the secondary. Played behind a bad offensive line and blocking scheme. Acquired some unfortunate habits: Antsy feet, poor vision and loss of trust. Bounces outside too often. As a pass catcher, secures passes with soft mitts and swiftly bolts upfield. Willing pass blocker but misses proper blitzer intermittently: Lacks proper technique, passive puncher and needs additional coaching. Likely most successful in a gap scheme. Feature back upside if all weaknesses addressed and improves in all areas.

Meteoric rise up drafts boards after a spectacular campaign with over 1,400 yards rushing and 55 receptions, which established a school-record for running backs. In 2019, All-SEC First Team, LSU Team Captain and Football MVP. Offensive Player of the Week (SEC) against Alabama with 103 yards rushing, nine receptions for 77 yards and four touchdowns. In high school, a four-star prospect and one of the best runners in Louisiana. At 5-foot-7 and 207 pounds, a bruising ball carrier who wears down opponents with a powerful punch and tackle-breaking elusiveness. Plays much bigger than stature might indicate. Fanciful vision and remarkable patience behind the line of scrimmage. With quick and light feet, smooth athlete who easily changes direction. Pronounced lateral agility and top-notch jump cuts. Good anticipation. Stupendous short-area quickness and contact balance. Reads blocks and uncovers holes. Dips in-and-out of tackler’s grasp. Low build and delivers big blows. Constantly drives forward to gain extra yardage. Lethal in the open field, and difficult to bring down in one-on-one matchups. Sporadically, employs notable spin moves. Leaves defenders grasping for air. Good long speed and manipulates defenders at second level. Elite problem solver with active eyes. Manipulates opponents: Master of angles and breaks ankles. Corrals pass and rapidly turns upfield. Easily snatches swing routes and check downs. A liability in pass protection: Must identify blitzers better and illustrate more determination to stonewall pass rushers. Not a special teamer. Scheme-versatile runner: Can be successful in gap- or zone-run games. Draft profile foreshadows an underappreciated late bloomer who reached new heights and projects as a three-down playmaker in the NFL. 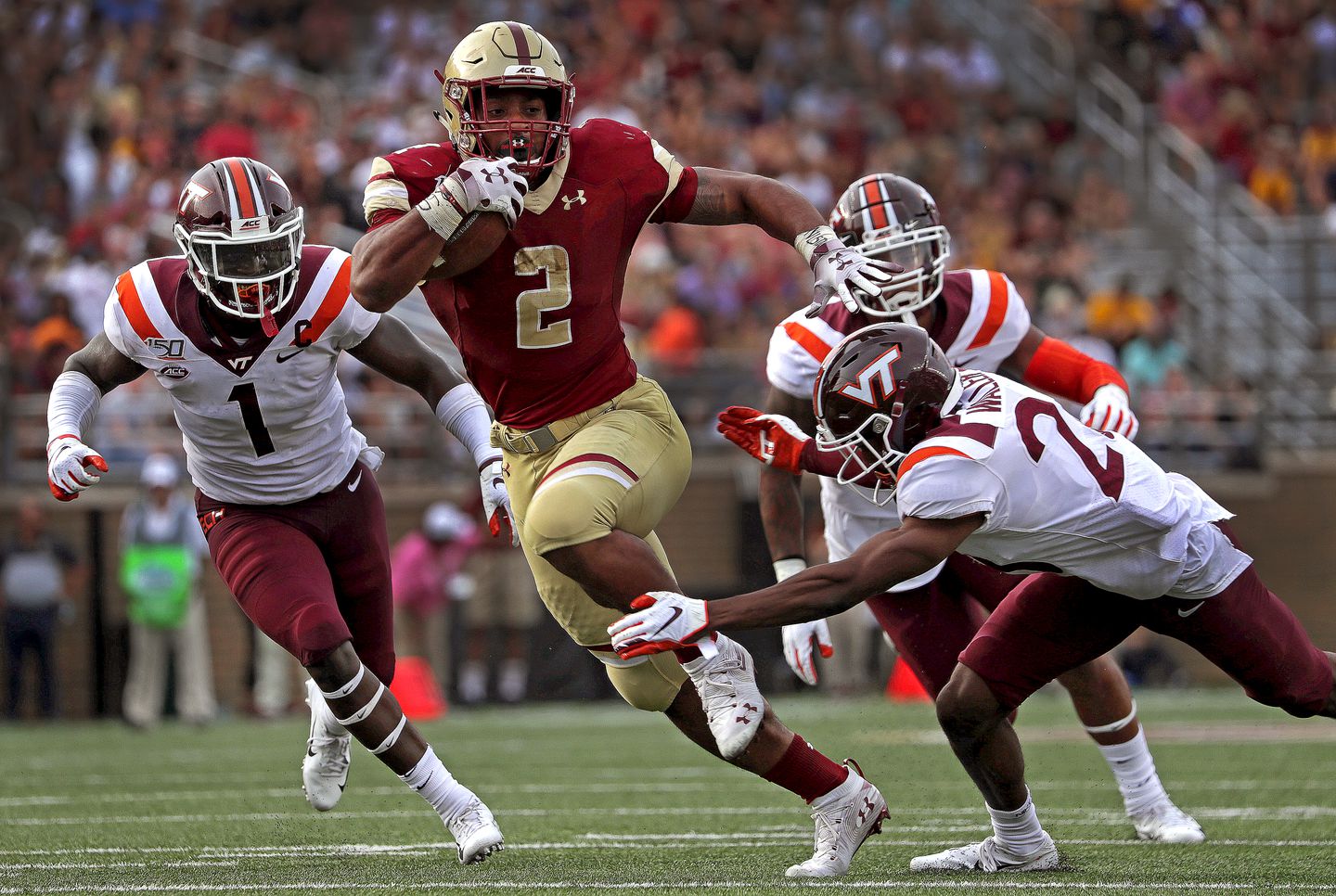 Draft value escalates after Combine elucidated upper-echelon athletic ability. During campus tenure, logged three consecutive 1,000-yard campaigns and produced over 1,500 yards twice. In 2017, ACC Offensive Rookie of the Year, FWAA Freshman All-American and First Team All-ACC after rushing for 1,589 yards and scoring 14 touchdowns. As a sophomore in 2018, First Team All-ACC and first player in program history to exceed 1,000 yards in back-to-back campaigns. As a junior in 2019, First Team All-ACC and AP Third Team All-American after posting second 1,500-yard season. Concluded career as the school’s all-time leader in rushing yards (4,382) and touchdowns (40). Averaged 5.2 yards per carry versus stacked boxes designed to stop the Eagles’ ground game. A bulldozing ball carrier at 6-foot-0 and 247 pounds with a thick-trunked frame. Gap runner who navigates traffic well with quick feet and exceptional vision. Excels between the tackles: Identifies small creases and detonates through the holes. Short-yardage specialist with impressive contact balance: Runs over and through tacklers with lean and leg drive. Easily breaks tackles. For a huge back, quicker and smoother than expected. Under appreciated long speed and assaults second-level defenders. Drags tacklers and dispenses punishment. Disciplined runner who trusts blocking schemes. Will heavy workload shorten professional career? Not very creative or nifty and looks scheme dependent. Limited hand-eye coordination as a pass catcher. Does not stonewall blitzers despite size. Lack of elite change of direction skills and agility. Among runners at Combine, finished first in broad jump (131’) and vertical jump (41’). Eye-opening BMI at 35.1. A classic gap-power scheme runner in the NFL and landing spot will dictate draft price in fantasy leagues.