So you’ve finished your startup draft (hopefully with the aid of my Ten Draft Commandments- https://www.footballdiehards.com/fantasy-football-columns/html/dynasty-101-transitioning-from-redraft-to-the-one-true-format.cfm). Now your leaguemates are telling you that it’s time for another draft, this time with just the incoming rookies. Maybe someone even wants to make a trade with you involving rookie draft picks. So how do you determine exactly how valuable these picks are, and how likely they are to pan out to at least a flex-worthy player? To a true starter? To a stud?

I decided to explore this with the help of my associate, fellow dynasty enthusiast and resident Excel sorcerer Tan Ho. We wanted to determine the value of draft picks relative to each other by finding out the odds of selecting a useful player based on position and where you draft. To do that, first we gathered historical rookie ADP data from 2009-2014 (data was unavailable prior to 2009 and we cut it off at 2014 to minimize skewed/unreliable data). We then matched the ADP data to positional fantasy football rankings from the same years, and generated charts to show how many players became consistent studs, starters, or flex players. We defined the positional finishes required for stud, starter, and flex as follows:

If you draft a player in dynasty, you are hoping to get more than one good season out of them. So to qualify as a stud/starter/flex, a player had to have at least two seasons where they achieved that high of a positional finish or better (meaning a player with one RB3 finish and one RB15 finish would qualify as a starter, but not a stud). To give a better idea of what you’re buying with more specific picks, we’ve broken down the success rates of each position in different ADP tiers, starting with the elite of the elite- players with an ADP in the top four.

Note: “Total Drafted” includes ALL players from the ADP tier, including those who did not become Studs, Starters, OR Flex.

People seem to favor RBs with the top four picks, although those planning to draft Fournette or Cook may be disappointed at the 14% RB1 rate (the RB2 rate of 43% is a small comfort). WRs were slightly less popular but look like the safest option among the top tier, as 56% of those chosen became at least WR2s and 33% became WR1s. There were no TEs in this tier, and the only QB (Andrew Luck) became a QB1.

Through the rest of the first round, running backs and wide receivers were drafted at a similar rate. The RB1 rate was actually slightly higher among the second tier than the first, but the RB2 rate dropped dramatically (from 43% to 24%). The WR1 and RB1 rates in this tier were comparable, but the WR2 rate of 40% was much higher than the RB2 rate of 24%, making WRs the safer investment in the second tier as well as the first.

Wide receiver was the most popular position drafted in the second round but also had by far the worst success rates, with only one of thirty-one WRs selected achieving even WR2 status. TEs, on the other hand, had extremely high success rates (likely because most years the top TE prospect in the draft class has a second-round ADP). Success rates for RBs were roughly half of what they were in the first round, but remained high enough to make second-round RBs a viable investment.

The data here was unsurprising, confirming that third round picks are essentially a dart throw at every position. The only thing approaching an outlier was the 20% RB3 rate, which is likely a product of the relative unpredictability and volatility of the RB position.

Now that we’ve examined the probability of your draft picks achieving sustained success, let’s determine how long it typically takes a player to first break out. To do that we used line graphs to show how the probability of a player achieving a starter-worthy season increases over time. Each line represents a different position, and each point on the graph represents the chance that a player will have had a top-24 WR/QB or top-12 QB/TE season by that year or earlier. 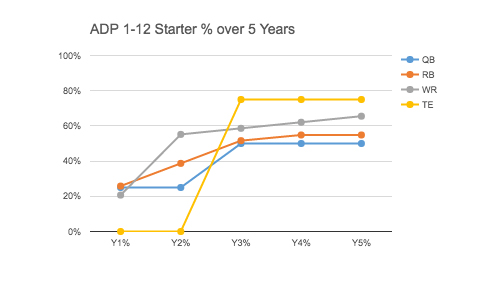 When it comes to players drafted in the first round, only about a quarter achieved starter status in their rookie year (with similar rates for all positions other than TE, for which the data was unreliable due to sample size issues). The biggest jump in development for first-round WRs appears to be between years one and two, while QBs make the biggest jump between years two and three and RBs develop steadily in the intervals between years one and three. In all cases, it would appear that if a first-round draft pick has not achieved success by their third season they are unlikely to do so. 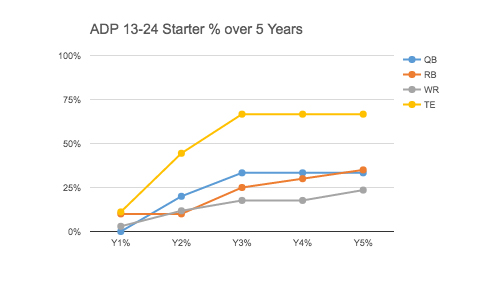 Predictably, the overall success rates at every stage of development are lower here for most positions (TE being the notable exception, due to a combination of sample size issues and the fact top TEs usually have a second round ADP). The chances of a second round pick making an impact their rookie year are minimal, but all positions other than RB experienced healthy development between years one and two and continued to develop through year three. Interestingly, RBs (generally considered a position that booms or busts fairly quickly) continued to develop at a fairly steady rate all the way through year five.

Now you’ve seen the numbers and the analysis and how it all breaks down, but how to apply your new knowledge to the rookie draft? Why, by following these simple tips, of course.


If you do your player research and keep these tips in mind you should be prepared for the rookie draft, and will likely have a better understanding of the true value of picks than most of your league. Before I leave you, it’s time for this week’s...

Juju Smith-Schuster.
The young (seriously, the kid is twenty) Trojan is so undervalued right now that I almost feel I’m doing truthers a disservice by mentioning him here, but he gets me higher than Action Bronson before Thanksgiving dinner. Due to the level of hype this RB class has received and the new hype around John Ross and OJ Howard, players like JJSS are routinely slipping to the bottom of the first and into the second round. His lack of breakaway speed has scared off some people, but they appear to have forgotten that the type of game he plays has little to nothing to do with speed. What’s even better is that he went to USC, which means that at least one Taco in your league will pass on him out of pure superstition. The data has shown us that top-end WRs are by far the safest bet in a rookie draft, and Juju is a hyper-competitive, football-smart physical specimen with room to develop into an elite red zone target in the NFL. Grab him with a late first/early second round pick and prepare to lord it over your league for years.