About a week or so ago I did an article on How to choose Defenses in MFL10’s and you can access that article here https://www.footballdiehards.com/fantasy-football-columns/html/primer-on-choosing-defenses-in-mfl10s.cfm. What jumped out at me as I did my study was that 55% of the Defenses that scored 20 points or more in a week were top 6 finishers at Defense. In another article I explained how stacking like in Daily Fantasy sports can be a good idea in MFL10’s. The goal is to supercharge our scoring each week. However what we want in our RB’s is a safe floor since there is so much uncertaintly at the position AS WELL as upside. Below you will find the 25 top scoring RB’s per game last year in the MFL10 format broken up by percentage of games the player hit certain levels. Removed are injury and bye weeks for accuracy. I started at 10 points per game which is a good floor and worked up in increments of 5 points. 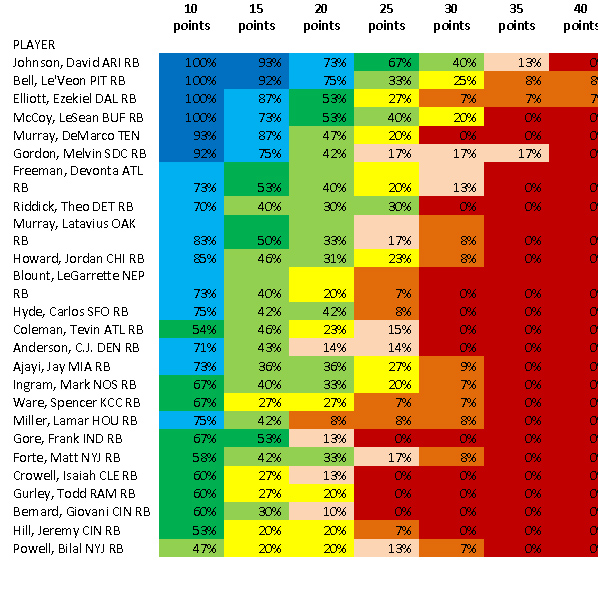 Here are some thoughts on the results for the players I found most interesting.

David Johnson: Looking at this chart confirms why David Johnson rarely is not the first choice taken in MFL10’s. While both Bell and Zek Elliott had monster seasons this chart points to how dominant DJ was even compared to them. 40 percent of the time scoring 30 points is ridiculous. With Bruce Arians, Larry Fitzgerald and Carson Palmer all possibly going out after the season I can’t see his work load decreasing and he has the fewest questions of any RB.

Le'veon Bell: Again we see ADP choosing wisely. As good as Zek was and while there has been talk about him being involved more in the passing game Bell was more consistent and had more upside in 2016. Another win now team and with Zek still under NFL investigation this data says Bell is 1.2

Devonta Freeman and Tevin Coleman:I think you have to look at them together because they are tied together. Looking at this I go back to my original thought this offseason that Freeman is overpriced often being drafted in the late first round. Often teams regress after a big year and lose the Super Bowl. This is acerbated by Kyle Shanahan leaving as offensive coordinator. You are paying a first round price for someone who has significant competition for workload and it shows with him having 20% less of a 10 point floor than the other first round picks. Coleman is going late fourth round in most drafts. He really needs an injury to hope to finish with a higher floor than 50% this year and there are other safer choices with upside that isn’t dependent on injury when he is being drafted.

Jay Ajayi: His numbers are polarizing. He had some amazing weeks but some duds. But he still has 73% 10 points game and is consistently drafted 5-7 picks after Freeman who had the same ration but without the competition on his own team. Injuries to his offensive line also need to be factored into some of his poor weeks. But I like how he is the guy in Miami and there are not too many RB you can say that about and his numbers on the chart I think justify his ADP

Lamar Miller: People are down on Miller because he underperformed his ADP last year while battling injuries. He still put up an elite 75 percent of games with 10 points or more. D’Onta Foreman is a raw back and I think it unlikely with his pass blocking weaknesses that he does more than keep Miller fresh early in the season. If he can stay healthy I think Miller floor and history of big games make him very interesting since his ADP has dropped him into the third round of most drafts.

C.J. Anderson: I have been avoiding C.J most of the offseason due to recency bias of how much he hurt me the last two years with his inability to stay healthy. But now with his ADP sinking him into the 5th and 6th rounds I think his injuries and the competition he faces for snaps is mostly baked in and I will start taking some shares as a 71% ratio of 10 point games is very valuable in that part of the draft.

Theo Riddick: No one jumps out at you more on this form than Theo. He has played at an elite level for two years. While there are concerns with so many backs in Detroit his role if healthy is secure and they showed last year a willingness to play him in the red zone. Besides a lead back like 70% of games of 10 points or more he also scored 25 points in 30% of his games. While there are a lot of backs in Detroit none of them really do what he does. His third down role should be secure and he is being drafted as the 28th RB off the board after being the 8th best PPG RB in this format last year.

Latavius Murray and how it affects Marshawn Lynch: Murray had 83%/50%/13% at 10/15/20 points and Marshawn Lynch inherites his role behind one of the best OL in the NFL. Without doubt he is also a better Goal line back than Murray. The big question is can Lynch stay healthy? Because if he does his age doesn’t bother me. His last weak year in Seattle was behind one of the worst OL in the league. If there is one thing Lynch has proven it is if he can get going he can break tackles. He is returning home to play as well. I am not going all in here due to the concerns but without the concerns he would be a first or second round pick.

Frank Gore: Frank Gore is the little engine that could. Every year is the year he is going to break down. And while his days of having upside are gone being able to access 10 points a game 67% of the time is very appealing. Too bad the word is getting out as his ADP has climbed 2 plus rounds in the last month.

Matt Forte and Bilal Powell: Justin Barlow mentions will draft both on the same team and I think that is a great suggestion. Both are reasonably priced unlike Freeman and Coleman are very likely to pay off their draft value without an injury. And if you get an injury you could get a top 15 back locked up by taking both on the same team

Todd Gurley: I think we saw Gurley’s floor last year. But 60% 10 point games can be valuable and we know he possesses the speed and ability to have big runs as he showed in his rookie year. With Sean McVay in town I think he is risky at ADP but posseses a safe floor and upside.

As I mentioned we want a nice mixture of floor and upside in our RB corps. This chart should help you to see clearly what each RB brought to the table in 2016.

Have a different take than one I had on the RB? Or think I missed something that jumped out at you when you looked at the numbers? Find me on Twitter @TodfromPa and let me know your thoughts. Follow me and I will follow back. And check out my Run to Daylight Podcast on www.Blogtalkradio.com or Itunes. And good luck with your MFL10’s!