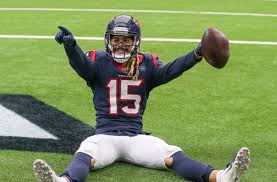 Will Fuller, HOU, WR
Regression, in its simplest form, is the tendency for data to return to its mean. Before simply saying a certain player was good last year, he must be average this year, we have to know what that player's true mean is. While precisely measuring this may be impossible, we can work with averages across the league and adjust for different situations. For example, although Davante Adams scored touchdowns at a far higher rate than almost any receiver in the league last year, it makes sense to assume that Aaron Rodgers' No. 1 receiver with an extensive role at the goal line will produce more touchdowns per target than an average wideout. Armed with this knowledge, let's look at five players who may not live up to their 2020 standards.

The 2020 season showed the true ceiling of Fuller if a team uses him in the right way as often as possible. The problem with rolling his 2020 campaign into the next year is that we have to assume that we can't assume everything around him will look the same. The Texans look likely to trade Deshaun Watson and Fuller is set to be a free agent. With both the quarterback and the receiver up in the air, it's unlikely that the vortex of talent and opportunity aligns so nicely for him in 2021.

Fuller graduated to a full-time role in 2020 but maintained a higher aDOT than most primary receivers. He also got to take on this role while playing with an elite passer in Watson. Fuller made the most of these circumstances by racking up 879 yards and eight scores on 53 catches. All three marks were career-highs. He did this with off-the-charts efficiency. Fuller became one of fewer than ten receivers to top 11.5 yards per target on at least 75 looks in the past 20 years. No receiver topped even 11 yards per target in consecutive seasons over that span. On top of his yardage efficiency, Fuller also scored at an absurd clip. More than one of every ten targets thrown his way resulted in a touchdown. One receiver has topped a 10% touchdown rate in consecutive seasons: Randy Moss. For Fuller to repeat his insane 2020 season next year, he needs to sign with a team that is willing to run him deep but also feature him in the passing attack. Despite being a team willing to make a big splash on a receiver in free agency, they also need to have an elite quarterback. With how often the big free agency spenders seem to be the lower tier teams, those factors coming together again is shaping up to be a tall order.

Kamara is the one player on this list that could still come in as a value next year depending on where his ADP shakes out. However, despite being a player that perennially outperforms league averages, Kamara was on another level in 2020. His five yards per carry and 7.1 yards per target were both highs over his past three seasons. They only failed to top his magical rookie campaign which also saw him earn fewer carries and targets. Both of those are likely to regress slightly but that won't be a massive hindrance on his fantasy output. Yards accounted for less than half of his fantasy points in 2020 so a modest decrease in his efficiency at producing yards will be a small blip on the radar. The elephant in his fantasy trophy case is his gaudy touchdown production. He scored 21 times which led all receivers, running backs, and tight ends. That was despite Kamara only touching the ball 270 times. Derrick Henry scored 17 times on 127 more touches.

Kamar's rushing TD rate of 8.6% was actually the highest rate for any running back with over 150 carries since the year 2000. Among the 21 running backs to earn as many carries in consecutive seasons, only two have maintained a TD rate above 6% across multiple years. Scoring touchdowns at a gaudy clip is easier for the league's best running backs but that doesn't make it easy for them. Kamara can still be an excellent fantasy option but it will be harder for him to finish as a top-three back than most runners because of his limited volume. Think twice before taking him ahead of Derrick Henry and Dalvin Cook.

The Tennessee Titans overperformed in a number of key ways last year but all of it begins with Tannehill, who has taken on a new life since being freed from Miami. He was brought up in nerd circles as a regression candidate last year and did come back to Earth in a few stats. His yards per attempt and touchdown rate both dropped but the scoring rate specifically could continue along the downward trajectory. Tannehill is likely a very good starting quarterback who simply landed with a dysfunctional franchise to start his career. On the other hand, maintaining touchdown rates over 6.5% yearly is very difficult. Tannehill will be attempting to top that rate for the third year in a row in 2021. For reference, none of Aaron Rodgers, Peyton Manning, Russell Wilson, or Drew Brees were ever able to repeat a touchdown rate north of 6.5% for three straight seasons. It's possible that Tannehill's pass attempts tick up and he can balance a drop in efficiency with a boon in volume but he'll be facing another form of regression on the ground as well.

In 2020, Tannehill rushed 43 times. That was 17th among quarterbacks. He found the end zone seven times on the ground. That mark was top-five among quarterbacks. That type of discrepancy is even more glaring than the mismatch of his passing volume and touchdowns. It becomes more amplified by the standard fantasy scoring format which awards more points for rushing touchdowns than passing scores. Tannehill has been a QB streamer and Late-Round QB darling over the past two years but his price in drafts is likely going to make it work chasing the next Tannehill instead of the expensive o