Free agency is one of the few times NFL teams do nothing but tell us what they think of their own players and a handful of players available in the market. In press conferences and statements, coaches can praise a player's route-running improvements, laud someone's expanded role, and even espouse their beliefs that a backup with no history of production is an integral part of their offense. When they have to make those statements with their wallets, the masks of coach-speak must come off. That's why free agency has so much power, not only for teams but also for fantasy players. It gives us a glimpse into their intentions. One narrative often associated with free agency is the tendency for teams to get the most of a running back in their final season with the team. That makes enough sense; teams use draft capital, pay millions of dollars and forgo other options at a position tasked with touching the ball hundreds of times in a season. Why wouldn't they want to get one last year of maximum usage from that back before his time with the team is up? But does the data back this up in any form?

We're about to look at a player's volume in their second to last season with a team before their final season with a team. This means that the below data was all drawn from backs who played at least eight games in back-to-back seasons with their team and then left. It sampled from backs who made at least $3 million per year on their new contract to filter out players who we can be certain are wild valuable to any team (ie. The Falcons are unlikely to feel a pressing need to get Brian Hill the ball more, even if it is his contract year). The $3 million mark has no significance other than giving us a reasonable sample size over the past five years while placing the backs inside the top-25 in average yearly contract value (based on 2020's rankings).

This method inherently has a swath of bias in favor of the backs being valuable. It assumes that the back stays somewhat healthy. It also assumes that we know which backs teams will covet before free agency (which also necessitates they make it to free agency).

Because it gives the benefit of the doubt to teams riding their backs before letting them walk, the fact that contract-year backs show no signs of increased touches speaks volumes.

Running backs who leave their team in free agency do not see an uptick in touches of any form. Changes from final year (N) to year N-1 on a per-game basis: 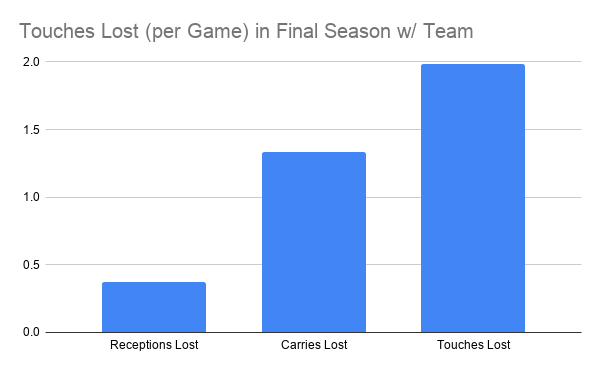 Running backs that are set to leave their team are rarely doing so because they are dynamic playmakers set to get rich on the open market. Those players are re-signed by their team sometimes years before they could even make it to free agency. Christian McCaffrey and Ezekiel Elliott were each given a mega-deal with a season left on their rookie contract. Players who are available via free agency are typically discarded from their original team and that team recognizes it years in advance.

While we can't predict which teams are going to let their fantasy-valuable back go, here are the most prominent backs with a chance to find a new home after the 2020 season.
Leonard Fournette, Jacksonville
Chris Carson, Seattle
Aaron Jones, Green Bay
Kenyan Drake, Arizona

If $3 million is not a high enough bar for the back's future contract, raising it doesn't swing the argument either. At $5 million, the difference is minimal and backs still saw a dip in their final season production. Lastly, some backs did not "walk" from their teams as much as they were shown the door-cut. Removing these backs lessens the blow our cohort saw in their collective final season but does not turn it into a positive either. The sample is also littered with backs who came to prominence as a backup in a larger role, then left their teams. Even this could not spin "impending free agent" into a positive light.

So teams don't squeeze the last drops of juice out of their soon to be team-less backs, but do their new teams want to put their dollars to work more? 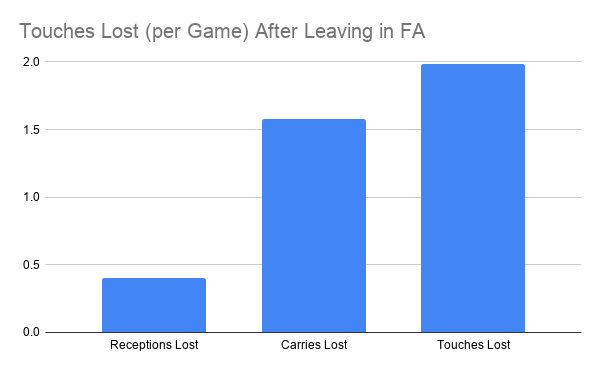 Nope. Running backs generally lose touches when they leave in free agency. Removing cut backs helped their cause but, ironically, the more expensive backs actually lost more touches on their new teams. The results speak for themselves. Good backs are kept by their respective teams and get the ball a lot. If a team lets their back take a swing at free agency, that back was likely replaceable in the first place and even the new team will come to that conclusion, often within the back's first season on his new team.