Courses covering all aspects of draft guide and in season management. 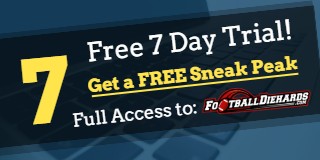 Football Diehards Fantasy Football University has the best courses which cover everything you need to know about draft preparation. From normal redraft leagues who use serpentine style drafting, PPR, non-PPR. Including Dynasty style leagues and auction style drafting. How to use the various tools that can really give you an extra edge are also covered. Special sessions setup for interactive Question and Answer with Experts.

Getting Started
This video gives you an overview of the in our Football Diehards' Fantasy Football University video classes.

Plan Your Rounds
Roster Goals
Determining Players You Want to Target and When
This video walks you through important items you need to understand as you start preparing for your drafts.

The Importance of ADP

The video class will go over the importance of ADP in your fantasy drafts. How to use it and when to start ignoring it, as your drafts progress. ADP is an essential tool to understand what you're competitors are thinking. Picking the proper ADP is draft specific. High-stakes players tend to take quarterbacks late. ESPN and Yahoo local type leagues tend to take quarterbacks earlier. You can see a drastic difference in the ADP for those types of leagues. So, as you prepare for each of your drafts, you need to select the proper ADP that best fits.

As you prepare for our drafts and studying all the various things you learn in these classes, it's also very important to recognize that the drafts will have changes in directions from your studied theories. In some leagues you may notice quarterbacks going early and in others going very late. As each of your drafts progress, you need to recognize that a certain draft position or positions are being taken much quicker or slower than the typical average draft position. Each draft is different. Draft relativity means you recognize these changes and modify your draft strategy per skill position. This video gives you helpful illustrations as to possible solutions when draft relativity occurs.

Up to your next pick
A nice technique when determining who we are going to take at this particular draft spot and also who you're going to take it your next draft position can be aided by counting players. Let's say there's 14 pics until your next selection. You can go down your cheat sheet and count how many running backs, receivers, tight ends, quarterbacks, etc you think will be taken and count down your cheat sheet checking off these players. Then you're going to be left with who could be available 14 picks from now. If you have a targeted player that you really want and that player would be taken given your estimated player account - this gives you a valuable piece of data to determine who you're going to take now.

Wait Until Next Round - How Mad Will You be?!

Another psychological question you can ask yourself as you're about to select this rounds player. This video helps you make those flip of a coin decisions.

How to use Fantasy Football Mock Draft simulators

Practicing before your draft is vital. This video will show you how to study and prepare using mock draft simulators.

Important Fantasy Draft Techniques Not to be Forgotten

Several years ago I was in a draft in Las Vegas Nevada. It was in the third round of the high-stakes contest. The manager right next to me emotionally and frustratingly said; "well, the draft is over." This guy paid a lot of money to come to Vegas to think two rounds into the draft where he may not have gotten the exact players he wanted, has now declared the draft over. Great fantasy football managers don't waste any picks. There thinking about every pick all the way to their last. This video talks about late round strategies that can really help you maximize the potential of your drafted team.

Things You Should Avoid

Taking Your Friends Favorite Player(s)
Group Think
It is very important to know what you are going to do in your draft. It's also very important to know things that you want to avoid doing. Group think can really make you lose focus on all your preparation you put in. Yes, it's very important to recognize what other people are thinking, when you're watching and getting advice from experts. There can be players they favor that you don't and vice versa. You need to understand why they're thinking this, before the draft. Then decide whether you want to include these players as your value players are sleepers. This video goes through the mental aspect of making your decisions and sticking with them.

Variance (Diversity) In Your Drafts

Variances a term that's come up in daily fantasy sports strategies and can be applied to season-long also. If you play several different leagues each year you may consider diversifying some of your players. In other words, if you have a sleeper that you're picking in the third round and you're in 10 leagues, do you want that player in all 10 of your leagues? Perhaps you do. However, you may want to consider having that player in maybe seven of your 10 leagues, giving you some variance or should we say diversity in your drafts. Remember, fantasy football is not an exact science. That's why it's so much fun! This video will go through these different diversity strategies.

This course reviews how to determine what players you should consider picking up on waivers each week of the fantasy season. this video walks through tools which can really help you with these decisions with emphasis for those who have multiple leagues.

This video works through the very important decisions on when to cut players. Emotions are high when one of your top picks is not performing as expected. When should I cut the player or should I hang on for another week.

Here we review the My Fantasy GM Lineup optimizer tool. This is an interactive tool that helps you make your in-season starting lineup decision.

Understanding how to respond to injuries as far as making lineup decisions etc. This video will talk about progression of injury information through the week and how it may impact your decisions.

What is a Fantasy Football University?

The Football Diehards Fantasy Football University is an intensive learning experience that will help build more consistent success as a fantasy football manager, using a series of lessons and tools to help you focus your draft and in-season management strategies.

Why should I enroll in the Football Diehards Fantasy Football University?

With a knowledgeable, experienced staff (boasting a combined total of more than 100 years in fantasy football league management) to guide you through our lessons, introduce and familiarize you with proven strategies and teach you how to use the tools available at FootballDiehards.com, our Fantasy Football University will set you up for sustained success.

What will I learn in the Football Diehards Fantasy Football University?

You will be immersed in both draft and in-season management strategies that have been proven winners over the course of time. In addition, you'll learn how to use our proprietary cutting-edge tools which will allow you to assess, organize and utilize data others in your league won't be taking advantage of.

Will the Football Diehards Fantasy Football University improve my chances of winning a championship?

Absolutely. By applying the tested and tried strategies you'll learn here -- along with the news, data and tools available on the FootballDiehards.com site, you will be in position to challenge for fantasy football titles in a variety of leagues formats and scoring systems.

What can I expect to learn at the Football Diehards Fantasy Football University?

You will learn step-by-step methods to prepare for your fantasy football drafts using a range of data in combination with strategies and online tools that will give you an edge in building your initial roster followed by lessons that will give you an edge in terms of in-season team management skills that will set up you to make the best possible lineup decisions and roster moves on a week-to-week basis. This includes use of the advanced tools and data found on FootballDiehards.com.

What kind of tools will be available for my use at the Football Diehards Fantasy Football University?

You will have access to a variety of expert rankings that can be configured to meet the specific roster and scoring requirements for your league, Average Draft Position and Positional Relativity data, Mock Draft Simulators, Personnel and Lineup Optimizers, including the MyFantasy GM Lineup Optimizer Tool among others.