The Facts: The Chiefs and Mahomes have reached agreement on a 10-year -- 10-year! -- contract extension that ties him to Kansas City through the 2031 season, league sources tell ESPN's Adam Schefter.
Diehards Line:Mahomes gets a long-term deal after his third NFL season (and with two years remaining on his rookie deal). . ... An updated and more complete version of this story is now available here.
Will Stefanski Wind Up Raising Nick Chubb's Ceiling? Sunday, July 5, 2020 | Time: 11:21 PT |  Reported by NFL.com

The Facts: Vikings running back Dalvin Cook turned in a star-making performance under new Browns HC Kevin Stefanski, so it's easy to surmise another sensational season for Chubb. That, in turn, begs the question of just how high the ceiling is for Chubb, who has churned out an amazing start to his career already. According to NFL.com, Stefanski's last year with the Vikings combined with Chubb's amazing start is ample reason for optimism that bigger autumns are ahead.
Diehards Line:Over his first two seasons, Chubb has rushed for 2,490 yards, which is the greatest start in Browns history, having run past the previous standard of Hall of Famer Jim Brown, who had 2,469 yards in his first two years. While the Browns were limping along in a 6-10 2019, Chubb was very much running strong for the majority of the campaign. Finishing the year with 1,494 yards, Chubb trailed only rushing titlist Derrick Henry (1,540 yards) and also ran off seven 100-yard games, which tied Ezekiel Elliott for tops in the league. Those 2,490 yards are third in the NFL over the past two seasons and further evidence that in just two seasons, Chubb has become one of the top backs in the league. Kareem Hunt is returning for a full season so perhaps that might limit Chubb's carries. Nonetheless, the prospects and hopes are high for Chubb in Year One under Stefanski. Little has slowed Chubb down over his first two seasons and Stefanski's arrival provides reason that things might actually speed up.
David Njoku Requests The Browns Trade Him Friday, July 3, 2020 | Time: 2:11 PT |  Reported by Profootballtalk.com

The Facts: The Browns exercised their 2021 option on Njoku's contract, but Njoku would prefer to be playing somewhere else by the time next year rolls around. Njoku has requested a trade away from Cleveland ahead of this season.
Diehards Line:Njoku's agent, Drew Rosenhaus, told Adam Schefter of ESPN that he informed the team of that request on Friday and that the Browns responded by saying they want to keep the 2017 first-round pick, but Njoku and Rosenhaus would like to see a move made before training camp opens later this month. “It is in David’s best interest to find a new team at this time,” Rosenhaus said. Njoku broke his wrist last season and only appeared in four games. He has 93 catches for 1,066 yards and nine touchdowns. The Browns signed Austin Hooper as a free agent and drafted Harrison Bryant in the fourth round earlier this year.
Cam Newton Betting On Himself This Year Thursday, July 2, 2020 | Time: 11:54 PT |  Reported by NFL.com

The Facts: No matter which way you slice it, the Patriots are getting a bargain in signing Cam Newton. The one-year contract for the 2015 NFL MVP includes just $550,000 guaranteed of the $1.05 million in base salary, NFL Network Insider Ian Rapoport reported. The deal includes $700,000 in per-game roster bonuses and $5.75 million in incentives. The max earnings Newton can reach if he hits all those incentives is $7.5 million total on the one-year deal.
Diehards Line: With just $550,000 guaranteed, the deal is the dictionary definition of low-risk for the Patriots. If Newton gets to New England and isn't healthy, Bill Belichick can quickly cut bait for the smallest of salary-cap hits. Compare Newton's guaranteed money with the one-year deals of Jameis Winston, who got $1.1 million, or, better yet, Andy Dalton, who got a $3 million fully guaranteed deal to be Dak Prescott's backup. Blaine Gabbert got $887,500 guaranteed to help Tom Brady learn Bruce Arians' offense. Newton's guaranteed money is identical to the $550,000 guaranteed the New York Jets handed an injured Joe Flacco on his $1.5 million deal. While the guaranteed portion is spectacularly low for a player of Newton's pedigree, the Patriots offer something no other team could: a legit shot at starting duties. The Pats offer Newton a chance to start, rehab the narrative surrounding his health and hit the market next season with the possibility of landing a lucrative long-term deal if everything goes well in 2020.
Wilson The Latest QB Enamored With Antonio Brown Thursday, July 2, 2020 | Time: 11:53 PT |  Reported by NFL.com

The Facts: Many QBs around the league are enamored with the idea throwing to Brown. The Seahawks' Russell Wilson is one of them. NFL Network's Mike Garafolo is told Brown would love to play in Seattle. But if it happens, it could take some time.
Diehards Line: Of course the QBs are salivating over Brown. They’re mostly thinking about Xs and Os. As Garafolo went on to note, however, it’s the coaches and GMs who have to weigh the risk vs. reward. But in a year like this -- no offseason, an altered camp and maybe some remote work — there’s a temptation to just go for it -- even with the possibility of league discipline likely to be a factor with Brown currently on indefinite suspension.
Randy Moss Likes The Fit For Cam Newton With Patriots Thursday, July 2, 2020 | Time: 12:42 PT |  Reported by NFL.com

The Facts: Randy Moss set records with Tom Brady in the New England Patriots offense. The Hall of Fame receiver, however, believes Newton will bring out the "fun" in the Pats' O. "I think we are really getting ready to see how fun that offense can really be," Moss said Tuesday on ESPN. "Not discrediting anything Tom accomplished because he accomplished some great things, but I think being able to have a guy like Cam Newton that can run the ball, they are able to spread guys out, and then being able to be that viable threat in the passing game that he can just tuck the ball and run."
Diehards Line: There is no question a healthy Newton brings diversity to the Patriots offense that Brady never could. Fun is in the eye of the beholder. The historic 2007 Pats offense with TB12 and Moss divebombing defenses was as exciting as all get-out. Newton's brand of offense should be a different kind of fun. "I just think what we have seen coming out of New England for the past, let's say 20 years, there is going to be a change in New England," Moss said. "But I think we are going to see them have a lot more fun out there and Cam Newton is going to give them that opportunity for the fans, not just the New England Patriots fans, but the football fans around the world to really see how fun this offense can really be." For that fun, diverse offense to be employed, Newton must remain healthy for the first time in years.
Jets Still Interested In Demaryius Thomas Thursday, July 2, 2020 | Time: 12:42 PT |  Reported by Profootballtalk.com 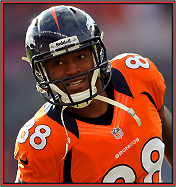 The Facts: The Jets acquired Thomas from the Patriots in early September. He could return for another season. The Jets are “still talking” with the free agent, Connor Hughes of TheAthletic.com reports.
Diehards Line: It might be Thomas’ only chance to continue his career. The Jets could use him if Thomas has anything left. Breshad Perriman and rookie Denzel Mims likely start on the outside with Jamison Crowder in the slot. Braxton Berrios and Vyncint Smith are the main backups. Thomas, 32, played 11 games for the Jets last season, making 36 catches for 433 yards and a touchdown. In 10 seasons, Thomas has 9,763 receiving yards and 63 touchdowns.
Report: NFL Will Shorten 2020 Preseason To Two Games Wednesday, July 1, 2020 | Time: 4:37 PT |  Reported by ESPN.com

The Facts: The NFL has shortened its 2020 preseason to two games, a source said, part of a larger acclimatization plan for players after an unprecedented virtual offseason program during the coronavirus pandemic.
Diehards Line: In essence, the league canceled Weeks 1 and 4 of its original preseason schedule. It had previously canceled its Aug. 8 Hall of Fame game. Most players will still report to training camp on July 28, but the first preseason games won't be played until Aug. 20-24. The second week of preseason games is scheduled for Aug. 27-31. Each team will play one home game and one on the road. The NFL and the NFLPA continue to discuss protocols for reopening of team facilities, testing programs and other matters related to playing amid a pandemic. Sources close to the discussions tell ESPN there is no hard deadline for a finalizing of protocols, but that if training camps are to start on time (July 28 for all but two teams), there's a sense on both sides that an agreement needs to be reached by the end of next week.
Steven Sims Wants To Be The Next Steve Smith For Rivera Wednesday, July 1, 2020 | Time: 4:36 PT |  Reported by Profootballtalk.com

The Facts: When Sims heard that Ron Rivera was hired as Washington's next head coach, he reached out to his agent for some information about the former Panthers head coach. Sims is listed at 5-10 and 176 pounds and he told Sam Fortier of the Washington Post that his agent told him that Steve Smith was the "only small receiver" that Rivera ever had in Carolina. While that's not entirely true, Smith was certainly the most prominent and Sims said learning that "was more motivation than I ever needed."
Diehards Line:"It wasn't a bad talk," Sims said. "It was right after we signed [Cody] Latimer, right after the draft. It was like, "[Rivera] brought in bigger bodies. I was like, 'Okay, that's what he likes.' I'm not saying I'm on the cut block. I'm just saying: 'Be different. Be another Steve Smith.' He started off the same guy. They only thought he was going to be a returner, and he's a [potential] Hall of Famer. ... He was a small guy who played big. He wasn't going to limit himself to being 5-9." As PFT notes, Sims spent most of the 2019 campaign as a returner who rarely got on the field as a wideout. He closed the year with 23 catches and four touchdowns in his final five games, however, and the rapport he's built with last year's roommate Dwayne Haskins could help him use that as a springboard to better things in his second NFL season.
Kyler Murray Takes The Blame For Bulk Of 2019 Sacks Wednesday, July 1, 2020 | Time: 11:00 PT |  Reported by USA Today

The Facts: Murray was the most-sacked quarterbacks as a rookie in 2019, getting taken down 48 times. That made the offensive line look bad. Murray recognizes that. “Last year, a lot of those sacks I feel were on me,” he told reporters in a video conference.
Diehards Line: As USA Today suggests, early in the season, it was bad. He held onto the ball too long and even sometimes scrambled, running out of bounds behind the line of scrimmage instead of throwing the ball away. However, things improved and he was sacked only twice in the final three games. Now, in the offseason, the offensive line remains roughly the same. Murray is glad there is continuity on the line, although it isn’t so much about him knowing them. It is about the chemistry between the linemen. “I think it’s more important that they know each other and they are familiar with how each other plays,” Murray explained. “(There are) certain things that you can’t really teach by being with each other.” Murray believes the Cardinals have “a lot of talent” in the offensive line room. He trusts the linemen to protect him but he knows he has to do his part. He plans on it. “I don’t think I’ll be putting those guys in that situation too many times anymore,” he said. “If it happens, it happens, but I think we’ll be a lot better just from experience.”