LeSean McCoy Ready For Whatever Role Bucs Give Him Tuesday, August 4, 2020 | Time: 10:30 PT |  Reported by Profootballtalk.com 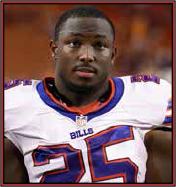 The Facts: McCoy arrived in Tampa Bay only recently, and he doesn’t know what his role will be. Whatever it is, he’ll welcome it. “I only can control what I can control,” McCoy told reporters on Tuesday. “If it’s five carries, if it’s 10 carries, whatever it is, I’m willing to give it my best effort — 100 percent. I can’t really complain — I had zero touchdowns and zero carries in the Super Bowl, so just to be on this team and help out and be part of it. They’re building something special here, I truly believe that. Any way possible I’m willing to help out and contribute.”
Diehards Line:McCoy had zero touchdowns and zero carries in the Super Bowl because he wasn’t among the 46 players in uniform for the game. “I started out pretty hot in [Kansas City] when I got there,” McCoy said, without delving specifically into whatever it was that caused him to fall out of favor. “Then some things happened, which happens in football.” Again, he didn’t say what happened. But here’s the reality: When Chiefs running back Damien Williams opted out last week, the Chiefs didn’t rush to bring back McCoy. ... If McCoy makes the 53-man roster in Tampa, which isn’t a given at this point, he’ll need to be high enough on the depth chart to justify a spot on the game-day roster (the lower positions will be occupied by running backs who play special teams, too), or he’ll be getting zero touchdowns and zero carries in plenty of 2020 games with the Bucs.
Story:Josh McCown Interviews For Texans HC Job
Story:A.J. Dillon, Williams, Crosby All Avoid Injury Designation
Story:Patrick Mahomes Avoids Injury Designation; CEH, Bell, Watkins Questionable
Story:Stefon Diggs, Beasley Avoid Injury Designation; Davis Questionable
Story:Patrick Mahomes Has Been Cleared From Concussion Protocol
Story:Patrick Mahomes Still In Protocol; Slated For Further Evaluation Friday Afternoon
Story:Patrick Mahomes On The Practice Field Again Friday
Story:Antonio Brown Ruled Out For Sunday's Game Vs. Packers
Story:Panthers Incoming GM Fitterer Asked About Interest In Deshaun Watson
Story:Retirement? Julian Edelman Isn't There Yet
Story:Vance McDonald Announces His Retirement
Story:WFT Names Martin Mayhew GM, Hurney VP Of Player Personnel