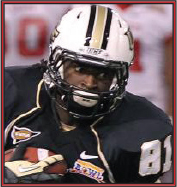 The Facts: Before the Tom Brady signing, the Bucs were focused on re-signing their own players, including Perriman. According to ESPN's Jeremy Fowler, they could focus in on Perriman as a downfield threat for Brady.
Diehards Line: A 2015 first-round pick by Baltimore, Perriman struggled with injuries and inconsistencies on the field during his tenure with the team. The Ravens declined Perriman's fifth-year option and released him before the start of the 2018 season. Perriman went to Cleveland in 2018, then signed a one-year, $4 million deal with the Tampa Bay Buccaneers last season and showed flashes of the player many expected to see in Baltimore. During the final three weeks of the regular season, when the Bucs were banged up at wide receiver, he caught 17 passes for 349 yards and four touchdowns. He finished the season with 36 catches for 645 yards and six total TDs and proved to be an intriguing deep threat. Does he fit Brady's skill set and will he be cost-effective working behind Mike Evans and Chris Godwin? Those are questions the Bucs must answer.
Story:Cesario: Texans Have No Comment On Deshaun Watson's Off-Field Issues
Story:Vrabel Not Ready To Rule Out Another Huge Season For Derrick Henry
Story:Chris Carson Talking Up Penny?
Story:Robert Woods Expecting Return To High-Powered Offense For Rams
Story:DaeSean Hamilton Drawing Trade Interest
Story:Cordarrelle Patterson Agrees To Terms With Falcons
Story:Falcons Release RB Ito Smith
Story:Lawsuit Count Back Up To 22 For Deshaun Watson
Story:Josh Dobbs Re-Signs With Steelers
Story:Cordarelle Patterson Visiting Falcons
Story:Jadeveon Clowney Signing With Browns
Story:TE Stephen Carlson Re-Signs With Browns