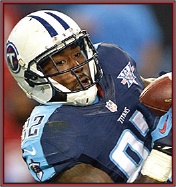 The Facts: Walker doesn’t know if he’ll begin training camp on the PUP list, less than a year removed from the serious ankle injury that ended his 2018 season. “I’ll leave that up to the coaches,” he said this week.
Diehards Line: After leaving last year’s season opener with an injury that required an air cast, Walker returned to the field during the Titans' OTAs and felt good about his progress. “Just stepping on the field, running routes and doing drills, that was the biggest [hurdle],” he said. “I had only been running for two weeks, and being able to run routes against guys, and beating them.” Walker sat out the June mini-camp and it sounds like he’s expecting the team to ease him into training camp—whether that means starting on the PUP list or not. “We have great coaches and training staff,” he said. “They’re probably not going to let me hit the ground running like I want to, but I look forward to getting into my groove.” We'll continue to watch for more.
Story:Cowboys Last Met With Dak Prescott's Agent Last September But Remain Optimistic
Story:Falcons Pick Up Matt Schaub's Option
Story:Ben Roethlisberger Expects Full Clearance In 2-3 Months
Story:Irsay: Colts Remain Undecided On Jacoby Brissett
Story:Ravens Give DC Don Martindale An Extension
Story:Ben Roethlisberger Begins Light Throwing
Story:Mason Crosby, Packers Agree On New Three-Year Deal
Story:Danny Amendola Gets A One-Year Deal To Remain With Lions
Story:Odell Beckham Should Be Halthy In About A Month
Story:Josh Doctson Signs With Jets
Story:Quinn Reiterates: Matthew Stafford Won't Be Traded
Story:Alshon Jeffery's Agent Disputes Notion His Client Wants Out Of Philly