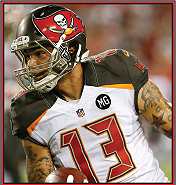 The Facts: Evans converted some of his base salary into a roster bonus earlier this offseason and he’s done it again in a move that gives the Buccaneers a bit more room under the cap. Tom Pelissero of NFL Media reports that Evans has converted $4 million of the $17 million in remaining base salary into a bonus. The cap hit will be spread over this year and the four years left on his contract, which leaves Tampa with $3.2 million in new space this year.
Diehards Line:The Buccaneers have two draft picks left to sign from this year’s class. There’s room to get deals done with first-round linebacker Devin White and third-round cornerback Jamel Dean while keeping some money on hand for other needs that may arise at some time down the road. Evans signed a new deal with the Bucs in March 2018 and set a career high with 1,524 receiving yards last season.
Story:Falcons Finally Announce Deal With Todd Gurley; Physical Still To Come
Story:Tom Brady Looking Forward To Challenge In Tampa
Story:Panthers Have Had Internal Discussions About Christian McCaffrey's Contract
Story:Kendrick Bourne Signs His Tender; WR Will Remain A 49er
Story:Bills Feel Stefon Diggs Is More Of A Sure Thing Than Drafting A WR
Story:Ben Roethisberger Progressing; Throwing At About 60 Percent Of Full Speed
Story:Aaron Rodgers Hoping To Play For Packers Until He's 40
Story:DeSean Jackson Out To Prove Something
Story:Antonio Brown Charged For January Incident
Story:Ricky Seals-Jones Signing With Chiefs
Story:Mitchell Trubisky Facing An Open Competition With Foles
Story:Sammy Watkins Agrees To Pay Cut To Remain With Chiefs In 2020