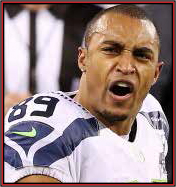 The Facts: Following up on a previous item. ... In what Baldwin termed a “letter to my younger self,” the now-former Seahawks receiver took to Twitter on Sunday night to unveil a 20-tweet thread that served as both a retrospective on his football career and an apparent official retirement notice. Baldwin ended the thread with a scene from one of his favorite shows, “Game of Thrones”, with the caption, “My watch has ended.” The latest episode of GOT had just aired.
Diehards Line: Baldwin’s Seattle career ended last Thursday after eight seasons when his contract was terminated, along with that of safety Kam Chancellor. Baldwin, who has had offseason surgeries on his shoulder, knee as well a sports hernia procedure, had been said to be considering retiring for several months due to his lingering health issues that followed a season in which he missed three games — the first he had missed since the 2012 season. After a late-season victory over Kansas City, Baldwin said battling the injuries had made the 2018 season “hell. ..." Baldwin ended his Seattle career second in receiving touchdowns with 49 and third in receptions (493) and receiving yards (6,563) trailing only Steve Largent in touchdowns, and only Largent and Brian Blades in the two other categories.
Story:Dak Prescott Visits Teammmates; Rehab Progressing
Story:LeGarrette Blount Announces His Retirement
Story:Stephen Hauschka Announces His Retirement
Story:Josh Gordon Being Reinstated; Eligible To Return Week 16
Story:J.K. Dobbins and Mark Ingram will not play versus the Steelers
Story:Lions optimistic about D'Andre Swift returning this week
Story:Mike Glennon to start for Jacksonville in Week 13
Story:Adam Thielen activated from COVID list
Story:Early Report: Ingram, J.K. Dobbins Not Expected To Play
Story:Falcons place Olamide Zaccheaus (toe) on IR
Story:Brandon Aiyuk activated off COVID-19 list
Story:Drew Lock, Blake Bortles, and Brett Rypien cleared to return