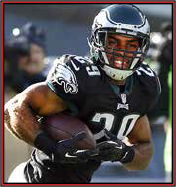 The Facts: Murray passed on a chance to work out for the Saints last month, but that doesn’t mean he isn’t looking for a job for the 2018 season. Murray told Adam Schefter of ESPN that he hopes to sign before training camp gets underway and that he’s had conversations with a handful of teams about that possibility.
Diehards Line: “I’ve had a lot of discussions with four or five teams that I feel will be a great fit for me,” Murray told Schefter. “It’s all about being transparent and, for me, I’m not looking to lead the league in rushing yards. Obviously I would work and do everything to give me the opportunity to do that, but it’s all about having an opportunity to get to the playoffs and have an opportunity to win a championship.” As PFT notes, Murray, who spoke to the Seahawks, Dolphins and Lions in March, said the time off since being released by the Titans this offseason has allowed him to recover from knee and hamstring injuries that cost him time last season.
Story:Adams: Teammates Aren't Sweating Aaron Rodgers' Situation
Story:Lions Don't View Jared Goff As A Bridge Option
Story:Saquon Barkley Posts Workout Videos
Story:Antonio Brown Completes Probation A Year Ahead Of Schedule
Story:Patrick Mahomes Thinks RBs Will Be A Bigger Factor In Passing Game
Story:Justin Herbert Excited About New Offense
Story:A.J. Green Expecting Rebound Opposite Hopkins
Story:Tom Brady Seems To Realize Even He Has Limitations
Story:Diontae Johnson Looking To Limit Dropped Passes
Story:Clyde Edwards-Helaire Hopes To Improve As A Receiver This Year
Story:Jets Putting A Lot On Zach Wilson's Plate... And That's Not Going To Change
Story:Laquon Treadwell Signs With Jaguars