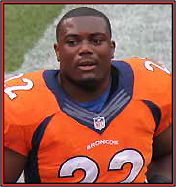 The Facts: The Panthers are counting on Anderson, a post-draft veteran addition to the team, to make an immediate impact. A source told the Observer that Anderson signed a one-year deal for $1.7 million (plus a possible $800,000 more in incentives). Jonathan Stewart, by contrast, made about $4.2 million in 2017 for the Panthers while rushing for 680 yards. Anderson doesn’t quite understand it. “Don’t ask me,” Anderson said. “I don’t know. Ask 32 teams.”
Diehards Line:Anderson is healthy, only 27 years old and just ran for 1,007 yards in 2017 for Denver. Still, the Broncos cut Anderson in mid-April, saving themselves about $4.5 million against this year’s salary cap, reportedly after trying to trade him first. About a half-dozen teams showed some interest but many of them ended up choosing cheaper running backs in the NFL draft. With his options dwindling, Anderson decided to sign the one-year deal the Panthers offered with the idea that another strong season will increase his value in the 2019 offseason. “I should be in my prime,” Anderson said. “I think I have an opportunity to do something really special here. I asked for the one-year deal. I want to prove myself that I can still play this game at a high level.” The Panthers hope Anderson can assume a similar role to Stewart, although he will need to beat out Cameron Artis-Payne to get the carries to do so.
Story:Adams: Teammates Aren't Sweating Aaron Rodgers' Situation
Story:Lions Don't View Jared Goff As A Bridge Option
Story:Saquon Barkley Posts Workout Videos
Story:Antonio Brown Completes Probation A Year Ahead Of Schedule
Story:Patrick Mahomes Thinks RBs Will Be A Bigger Factor In Passing Game
Story:Justin Herbert Excited About New Offense
Story:A.J. Green Expecting Rebound Opposite Hopkins
Story:Tom Brady Seems To Realize Even He Has Limitations
Story:Diontae Johnson Looking To Limit Dropped Passes
Story:Clyde Edwards-Helaire Hopes To Improve As A Receiver This Year
Story:Jets Putting A Lot On Zach Wilson's Plate... And That's Not Going To Change
Story:Laquon Treadwell Signs With Jaguars