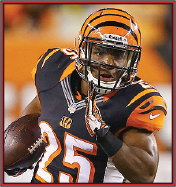 The Facts: Geoff Hobson of the team's website reports that Bernard should avoid going on the physically unable to perform list to start the season, but suggests that he may not make it back for the first game of the year. Hobson writes that the team likely doesn't "want to rush him back into the first couple of regular-season games" and that rookie Joe Mixon would likely fill any third down needs until Bernard gets back.
Diehards Line: Bernard tore his ACL last season and has not yet been cleared for a full return to football activities. ... As PFT's Josh Alper notes, the Bengals drafted Mixon in the second round of this year’s draft in a move that’s sure to impact Bernard’s role on the team moving forward. Bernard is going to have to get healthy enough to start playing in games before we’ll find out how much that role will change, however. ... We'll be watching for more.
Story:Raiders Haven't Granted Derek Carr Permission To Talk To Other Teams
Story:Brock Purdy Suffered Complete Tear Of UCL; Surgery Coming
Story:NFL Salary Cap Increasing To A Record $225 Million
Story:Report: Chargers Expected To Hire Kellen Moore As Their Next OC
Story:Report: 49ers Believe Brock Purdy Suffered UCL Injury
Story:Cowboys, OC Kellen Moore Parting Ways
Story:Travis Kelce Active Vs. Bengals
Story:Brock Purdy Missing Time With Elbow Injury
Story:Justin Herbert Had Surgery On Left Shoulder
Story:Vic Fangio Signing With Dolphins As Their Next DC
Story:The Latest: Travis Kelce A True Game-Time Decision
Story:Elijah Mitchell Declared Inactive Vs. Eagles