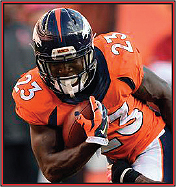 The Facts: Monday morning, the 2016 Denver Broncos will gather for the first time. The start of any team's offseason workout program also marks the end of the second wave of free agency. It's a time when players who test the market often re-sign with their team. The Broncos are hopeful they can return Hillman to their locker room Monday. Negotiations between the team and Hillman have heated up.
Diehards Line: As 9News.com's Mike Klis reminded readers, when the 2015 regular-season ended, Hillman was coming off his fourth, 100-yard rushing game of the season. He finished with 863 yards rushing on 207 carries and 7 touchdowns. He was the starting running back with C.J. Anderson coming off the bench. Anderson finished with 720 yards on 152 carries and 5 touchdowns. Yet, Anderson as a restricted free agent wound up with a four-year, $18 million contract that will pay him $6 million in 2016, while Hillman is unsigned 39 days into unrestricted free agency. For most of last season, Hillman was the starter and Anderson was the 1B back. Their roles figure to flip in 2016, should Hillman return.
Story:Shanahan Cranking Up The Jimmy Garoppolo Hype
Story:Devonta Freeman Wants Bucs To Reach Out To Him Directly
Story:Jason Stidham Working With Edelman
Story:Could Derrick Henry Loses Some Touches This Year?
Story:Allen Robinson Eagerly Awaiting A Contract Extension
Story:Bucs Not Ready To Pay Devonta Freeman's Price
Story:Arians: Two-TE Set Will Be Buccaneers Base Offense
Story:Drew Brees Apologizes For Comments
Story:Joe Burrow Progressing in Virtual Work
Story:Panthers Release Seth DeValve
Story:Van Pelt Pleased With Baker Mayfield's Offseason Work
Story:Phillip Lindsay Thinks He's A Great Fit For Broncos' New Offense