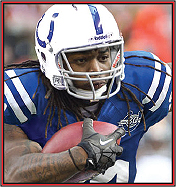 The Facts: Following up on a previous item. ... Although Richardson remains unsigned, HC John Harbaugh said Tuesday the team is counting on adding him to its roster in 2016 and giving him an opportunity to write a comeback story. "I'm planning on Trent being a Raven right now," Harbaugh told reporters at the NFL owners meetings in Florida. "We have an unofficial agreement with Trent. Hopefully, no one will come in and swoop him away from us."
Diehards Line: The Browns made Richardson, 25, the No. 3 overall pick in the 2012 draft on the heels of his stellar career at the University of Alabama, where he rushed for 3,243 yards and 35 touchdowns in three seasons. But the Browns traded him to the Colts after one season, and the Colts released him after he averaged 3.3 yards per carry in 2014. A tryout with the Raiders didn't produce a job, and Richardson was out of the NFL last season. Although the Ravens are already deep in running backs with Justin Forsett, Buck Allen, Terrance West and Lorenzo Taliaferro on their roster, the Ravens are apparently willing to give him a shot.
Story:Blaine Gabbert Re-Signs With Buccaneers
Story:Derrick Henry Signs His Franchise Tender
Story:Don't Get Too Excited, But Lamar Jackson Is Working Out With AB
Story:Lynn: Chargers Will Look At Everybody, Including Cam Newton
Story:Quincy Enunwa's Future Still Uncertain
Story:J.D. McKissic Hoping To Catch Some Passes In Washington
Story:Patriots Release Cody Kessler
Story:GM: Talks With Derrick Henry Have Been Positive
Story:Kyle Allen Looking To Compete With Haskins
Story:Godwin Gives No. 12 To Tom Brady
Story:Phillip Lindsay Won't Go Down Without A Fight
Story:Will O.J. Howard Get A Brady Bump?