Joique Bell Doesn't Have A Timetable For His Return Either Tuesday, August 4, 2015 | Time: 12:56 PT |  Reported by the Detroit Free Press 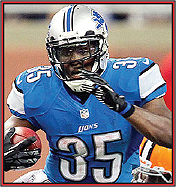 The Facts: Following up on the ongoing story. ... Bell is recovering from knee and Achilles surgery this off-season. There is no timetable for when he will begin practicing, although HC Jim Caldwell indicated Sunday that Bell would play in the exhibition season, which begins Aug. 13. Bell said on Monday that could not say when he might start practicing. "Coach Caldwell has a better idea of when I might be back as far as the evaluation of my injuries," he said.
Diehards Line: Caldwell maintained an optimistic view of Bell's status. "I think he's feeling as good as he's felt in a long time," Caldwell said. "He had a string of injuries there that held him back a little bit, and you can see it out on the field. He's moving better, his reaction times are better, so certainly when we get pads on we're excited to see what he can do." As Free Press staffer Carlos Monarrez suggests, this is a vital off-season for Bell. With Reggie Bush gone and Ameer Abdullah an untested rookie, Bell could be primed to finally lock down the starting job. But he said he's not frustrated while he remains sidelined. "I just keep working the hardest I can to be the best that I can," Bell said.
Story:Deshaun Watson, NFL Settle On 11-Game Suspension, $5 Million Fine
Story:Pederson: Jaguars Expect James Robinson To Be Ready Week 1
Story:NFL: No Change To Alvin Kamara's Status
Story:Kenneth Walker III Has A Hernia-Related Procedure
Story:Zach Wilson's Knee Surgery A Success
Story:Tom Brady's Absence Not Health Related
Story:Report: Deshaun Watson Willing To Accept 8-Game Suspension With $5 Million Fine
Story:Tom Brady Will Be Away From Bucs Until Aug. 20 To Handle Personal Matter
Story:James White Announces His Retirement From The NFL
Story:N'Keal Harry To Miss Up To Eight Weeks After Ankle Surgery
Story:Goodell Explained Decision To Pursue One-Year Suspension For Deshaun Watson
Story:Sean McVay Confirms His Contract Was Extended