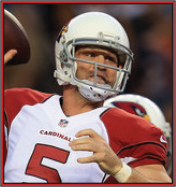 The Facts: Following up on the ongoing story. ... HC Bruce Arians says his team isn't looking for a quarterback. "We already found one," he told reporters at the NFL owners meeting Wednesday. While Arians hasn't officially named a starter, there's no doubt he's leaning toward Stanton, the backup to Andrew Luck in Indianapolis last season. "I have all the confidence in the world with him being our starter," Arians said.
Diehards Line: Arians also said he hopes to name a starting quarterback as soon as possible. There will not be the kind of through-the-training camp competition for the job that was the hallmark of former coach Ken Whisenhunt. "I'm not a two-quarterback guy," Arians said. "When everything settles down and the roster is complete for spring, we'll look at the situation and if we feel we can name a starter, we will name a starter. We'll exhaust every opportunity in the draft, whoever else is available, but we are quite honestly comfortable with Drew Stanton. ..." Arizona signed the free-agent Stanton to a three-year contract, and then released Kevin Kolb. The team has tendered an offer to Brian Hoyer. John Skelton and Ryan Lindley, who struggled mightily at quarterback for the worst offense in the NFL last season, remain on the Cardinals' roster.
Story:Deshaun Watson, NFL Settle On 11-Game Suspension, $5 Million Fine
Story:Pederson: Jaguars Expect James Robinson To Be Ready Week 1
Story:NFL: No Change To Alvin Kamara's Status
Story:Kenneth Walker III Has A Hernia-Related Procedure
Story:Zach Wilson's Knee Surgery A Success
Story:Tom Brady's Absence Not Health Related
Story:Report: Deshaun Watson Willing To Accept 8-Game Suspension With $5 Million Fine
Story:Tom Brady Will Be Away From Bucs Until Aug. 20 To Handle Personal Matter
Story:James White Announces His Retirement From The NFL
Story:N'Keal Harry To Miss Up To Eight Weeks After Ankle Surgery
Story:Goodell Explained Decision To Pursue One-Year Suspension For Deshaun Watson
Story:Sean McVay Confirms His Contract Was Extended