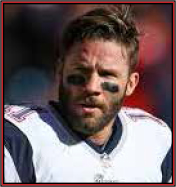 The Facts: Edelman dealt with multiple injuries over the course of the season, and two of those problems are going to require offseason surgery, the Herald has learned.
Diehards Line: Edelman played with a separated AC joint in his left shoulder, which was first reported by The Athletic’s Jeff Howe. Later in the year, the slot receiver was also dealing with an injury to his left knee, which will now require a scope to identify and help remove a loose body. His shoulder will be surgically repaired. The 33-year-old, who played through those injuries along with a rib problem, still managed a career-high 1,117 receiving yards on 100 catches, plus six touchdowns. Those were team highs in all three categories for Edelman, who was just named the Patriots 2019 Ed Block Courage Award winner for exemplifying the principles of “courage and sportsmanship” while also serving as a “source of inspiration.”
Story:Eagles Fine DeSean Jackson; Plan To Keep Him On The Roster... For Now
Story:Hunter Henry Not Expecting Long-Term Deal
Story:Chiefs Re-Sign Matt Moore
Story:Dolphins Not Looking To Give Matt Breida A New Contract... Yet
Story:Cam Newton Working With New Teammate Harry
Story:Vrabel Preaching Patience, Confidentiality In Derrick Henry Talks
Story:Lamar Miller Hoping To Find A New Team Soon
Story:Patriots Officially Announce Cam Newton Signing
Story:Raheem Mostert Requests A Trade From The 49ers
Story:Titans, Derrick Henry Still Talking Long-Term Deal, But Nothing Imminent
Story:Patrick Mahomes Meets Media, Address New Contract
Story:Rex Burkhead Agrees To Rework Contract