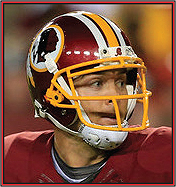 The Facts: In more than four seasons with the Redskins, McCoy hasn't missed a single offseason workout or training session. Until now. McCoy is not in Ashburn as the Redskins currently work through phase one of offseason workouts. Instead, per doctor's orders the quarterback is back in Texas recovering from another procedure on his leg, according to a source with knowledge of the situation.
Diehards Line: How things got to this point between the Redskins and their quarterbacks is almost hard to believe. Alex Smith broke his tibia and fibula last November, and then shockingly, McCoy broke his fibula two weeks later in an early December game in Philadelphia. Despite the broken leg, the Redskins hoped to get McCoy back for a possible late season playoff game. HC Jay Gruden explained that McCoy and the team pushed too hard to get back in 2018, and that's what caused the quarterback's setback this spring. Now, McCoy has undergone another minor procedure on his leg, his third since the December injury, though the source maintains he could be back in Ashburn as soon as next week. McCoy, who should be ready for training camp, and Case Keenum will open the summer competing for the top QB job. Of course, it's also possible the Redskins add another passer in this week's NFL Draft. ... Stay tuned.
Story:Deshaun Watson, NFL Settle On 11-Game Suspension, $5 Million Fine
Story:Pederson: Jaguars Expect James Robinson To Be Ready Week 1
Story:NFL: No Change To Alvin Kamara's Status
Story:Kenneth Walker III Has A Hernia-Related Procedure
Story:Zach Wilson's Knee Surgery A Success
Story:Tom Brady's Absence Not Health Related
Story:Report: Deshaun Watson Willing To Accept 8-Game Suspension With $5 Million Fine
Story:Tom Brady Will Be Away From Bucs Until Aug. 20 To Handle Personal Matter
Story:James White Announces His Retirement From The NFL
Story:N'Keal Harry To Miss Up To Eight Weeks After Ankle Surgery
Story:Goodell Explained Decision To Pursue One-Year Suspension For Deshaun Watson
Story:Sean McVay Confirms His Contract Was Extended