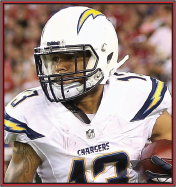 The Facts: In light of first-round draft pick Mike Williams' potentially lingering back injury, the Chargers could use a positive update on Allen's quest to recapture No. 1 receiver form after missing 15 games with an ACL tear last season. To that end, Philip Rivers fully expects Allen to reemerge as his go-to target as soon as the 2017 season opens. "He looks like himself," Rivers said last week on The Rich Eisen Show. "... I really think he looks just as good as before he got hurt."
Diehards Line: Insisting that he feels "amazing," Allen labeled his recovery at "85 percent" back in mid-April. Since then, he has impressed Rivers with his work in May and June practices. "He practiced with us all offseason," Rivers continued. "I spoke to him the other day, and he's so fired up to be out there with us. I don't think you'll see a difference. You'll see the same guy trot out there as last September." Still just 25 years old, Allen has now suffered severe injuries to both knees in addition to a lacerated kidney that cost him the final eight games of the 2015 season. If Allen can avoid a setback in training camp and the preseason, the Chargers will have the luxury of holding Mike Williams out until his back is fully recovered. With or without his top draft pick, Rivers figures to be directing one of the NFL's most dangerous offensive attacks this season.
Story:Blake Bortles Signs with Denver
Story:Devonta Freeman Expected to Sign with the Giants
Story:Blake Bortles Visiting Denver Broncos
Story:Chris Godwin Clears Concussion Protocol
Story:Josh Hill Returns in Saints Loss
Story:Josh Hill Exits with a Leg Injury
Story:Parris Campbell (knee) Out Indefinitely
Story:Courtland Sutton (knee) Out for the Year
Story:Giants Confirm Saquon Barkley (ACL) is Out for the Year
Story:Christian McCaffrey (ankle) Out 4-6 Weeks
Story:Drew Lock (shoulder) Out 2-6 Weeks
Story:Panthers "Initial "Hope" is that Christian McCaffrey's Injury isn't Serious