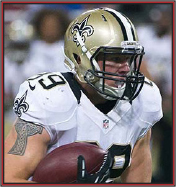 The Facts: The Saints spent last offseason talking up Hill after Jimmy Graham was traded to the Seahawks, but it ended up being Ben Watson who stepped up to fill the void. But GM Mickey Loomis, who appeared on Sirius XM's NFL Radio Tuesday night, said the Saints aren't ready to give up on Hill. "He's got a lot of talent," Loomis said. "I know this, he's a versatile tight end in that he can help us in the pass game and the run game."
Diehards Line: A restricted free agent this offseason, Hill finished 2015 with 16 catches for 120 yards. Watson, who is set to become an unrestricted free agent, finished with 74 receptions for 825 yards. If Watson doesn't return (something he'd like to do), Hill will once again draw considerable fantasy interest. Worth noting: Loomis also said the team is high on Jack Tabb, who signed with the Saints as an unrestricted free agent out of North Carolina last year. His season ended during training camp when he was placed on injured reserve with a torn ACL.
Story:Report: Derrick Henry, Titans Unlikely To Agree On Long-Term Deal
Story:WR Kelvin Harmon Suffers Torn ACL
Story:All Quiet On Dak Prescott Contract Front
Story:Jordan Reed Drawing Interest From Three Teams
Story:Washington Retires Their Nickname And Logo
Story:Sony Michel Rehabbing At Patriots' Headquarters
Story:Teams Interested In Terrelle Pryor?
Story:Eagles Fine DeSean Jackson; Plan To Keep Him On The Roster... For Now
Story:Hunter Henry Not Expecting Long-Term Deal
Story:Chiefs Re-Sign Matt Moore
Story:Dolphins Not Looking To Give Matt Breida A New Contract... Yet
Story:Cam Newton Working With New Teammate Harry